I’m sure you are bored by now of me saying things like “the whole skirt was supposed to take 2 months and instead is taking 3+!”. Sigh, why is sewing so hard?

I’m going to split the skirt posts into underskirt and drapery so as not to overload with photos.

It all started out with the underskirt – I stubbornly refused to buy more Truly Victorian patterns. (Not that they aren’t great, but I didn’t really want to spend the money). I was going to draft an underskirt from my Frances Grimble book, but looking at the shapes I realized it was basically identically to the pattern I used for the petticoat (which I did buy from TV).

So I just altered that pattern into the underskirt. Steps: 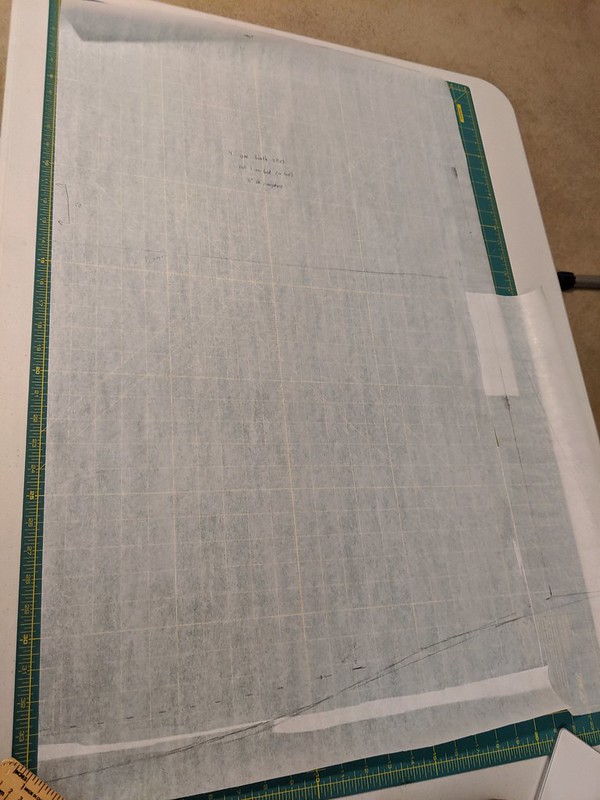 I was tempted to go straight to fabric, but I know myself well enough to know that is a bad idea. Cutting this out of an old sheet showed that my math needed some work at the back, because the petticoat was showing 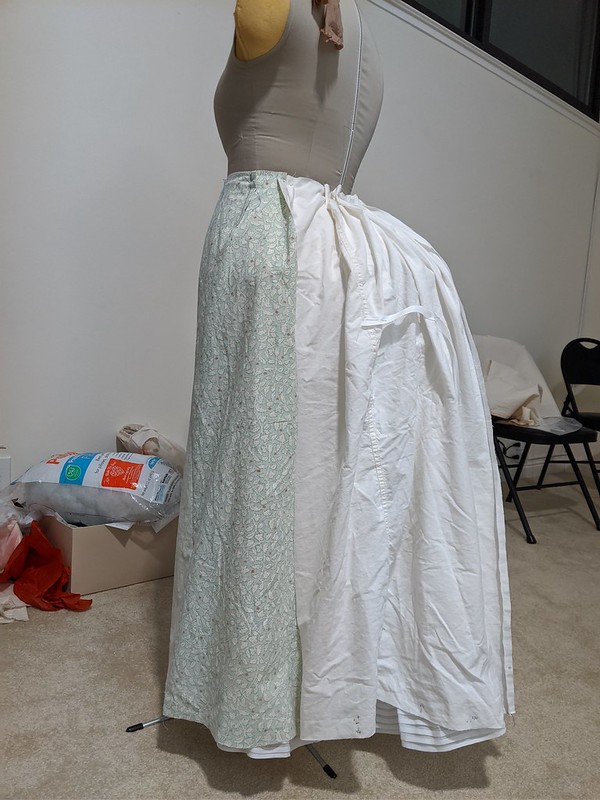 The tucks are pretty, but you don’t actually want to see them peeking out

So bustle skirts have a lot of structure in them to make them hang properly. (Note the Late Victorian Costuming Support 1870-1900 Facebook group is a great resource for this era). Just cutting out the fabric and doing a double folded hem is not historically accurate, and is going to end up very limp.

^ basically your skirt without supporting understructure

First I cut out each piece of of the lining. I used a polished cotton I bought from another costumer’s destash. I’ve never actually worked with this stuff before but it’s beautiful – light, stiff, and shiny on one side to let it slip around over the undergarments.

For the fashion fabric, for most of the pieces you don’t want it to go all the way up to the top. It’s going to be covered with a bunch of drapery, so you save on money and fabric by having it only go up as high as it needs. This also helps to reduce bulk at the waist, and you want the waist to look small for this era (note: look small, not be small. Optical illusions are your friend!).

Between the lining and the sateen at the hem I sandwiched a 5″ piece of crinoline. This helps the hem to to kick out. (In retrospect I should have used even more, but just the 5″ used up all the crinoline I had left. )

Also, I totally fucked up cutting the lining – I had carefully measured out 1″ additional seam allowance, and then started to half cut it off. 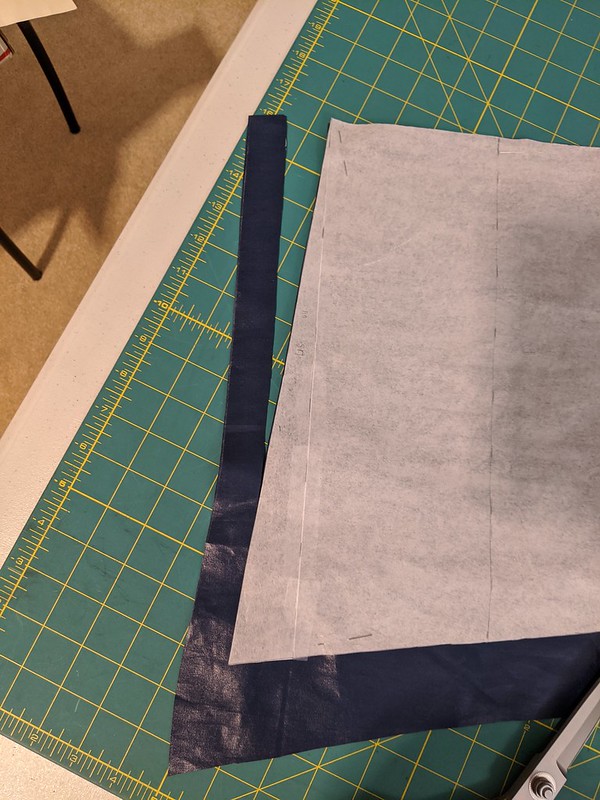 Just imagine how much swearing happened at this point.

Nooooo! I thought about doing historical piecing, but fuck it modern methods won out. 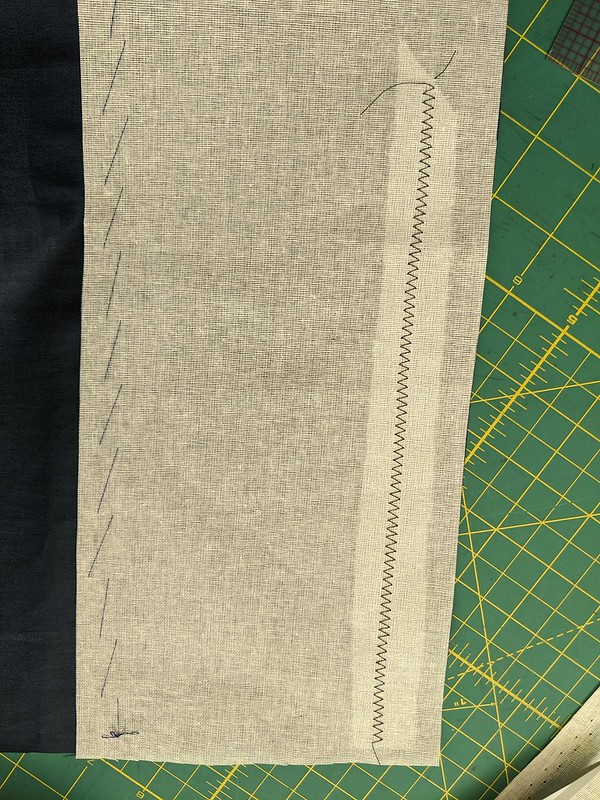 Part of the reason this took so long is me being super precise with construction (if not cutting). I hand-basted the sateen to the lining in the seam allowances of each piece to make sure there was no wiggle as I sewed them together.

(I did take one shortcut and serged all the sides. This sateen is super fray-y and ain’t nobody got time to be whipping the seam allowance to the lining. [When it’s a Worth repro, sure. This does not qualify].) 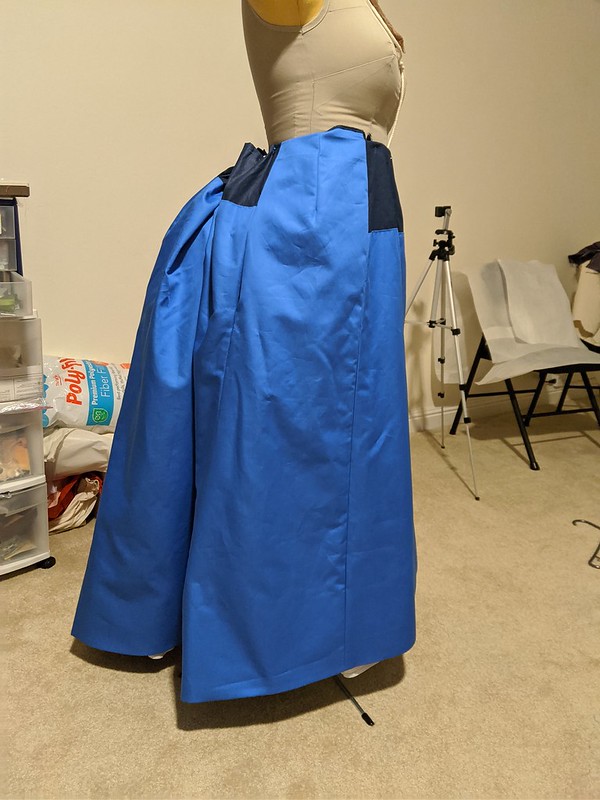 in retrospect, the fashion fabric came up way too high on the front and back pieces. My drapery is knee to floor length.

A few other fun construction notes:

There is a pocket between the back and right pieces. Always include a pocket! 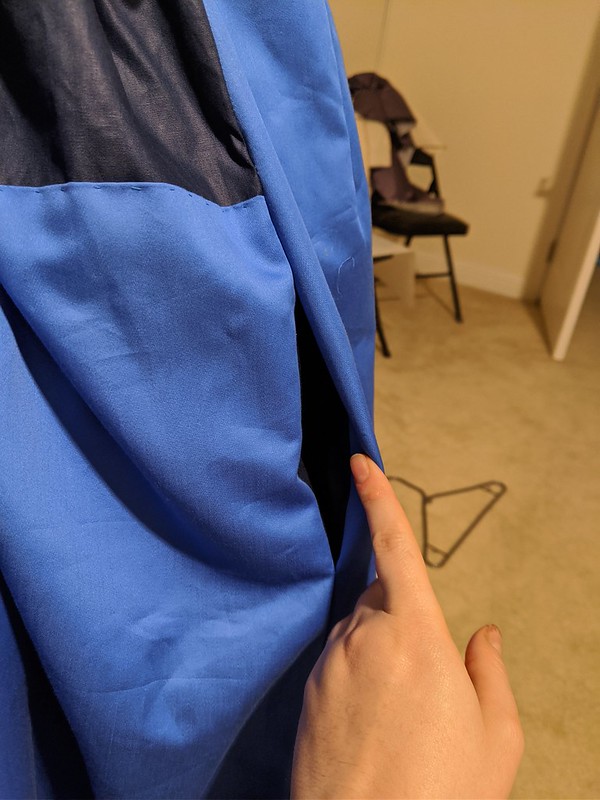 There is a proper placket for the opening between the back and left pieces. I used the instructions from Historical Sewing, but they confuse me a bit every time (I think they leave out a step where you need to cut into the seam allowance) so I keep meaning to find better instructions. Or post my own tutorial I suppose… 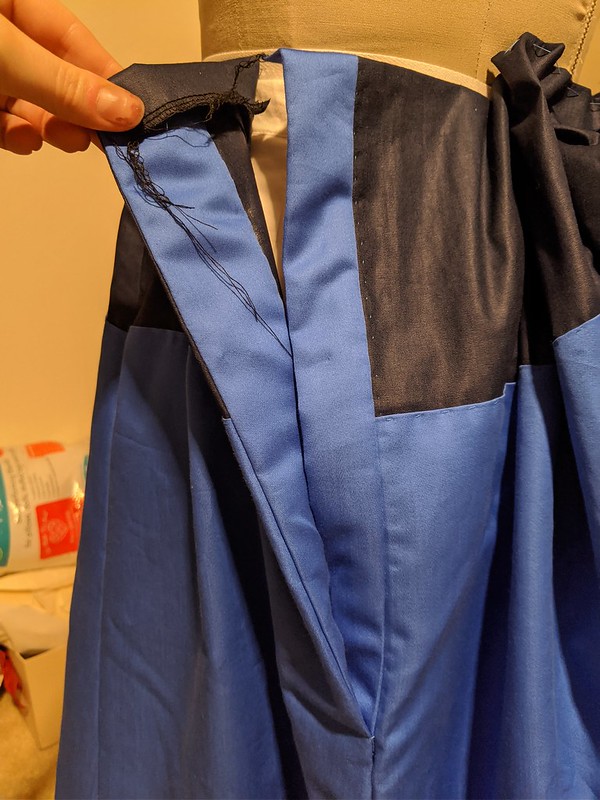 The hem is finished with a wide bias facing. If I wasn’t adding pleats to the underskirt I would also have bound the edge with tape (preferably a wool tape) to protect it further. 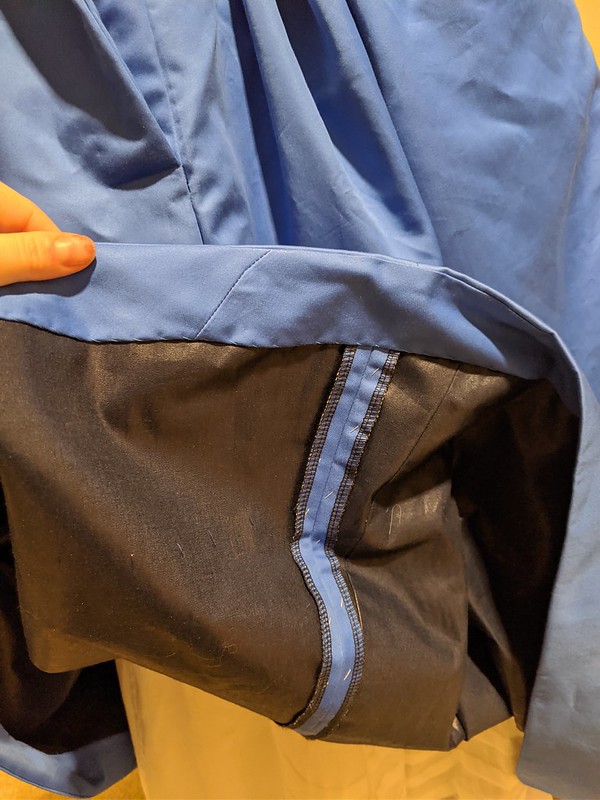 note the serging on the seams here

Then pleat time! I cut long strips of the sateen, hemmed one edge, and serged the other. I eyeballed the pleats and made as many as I had pins at one time. 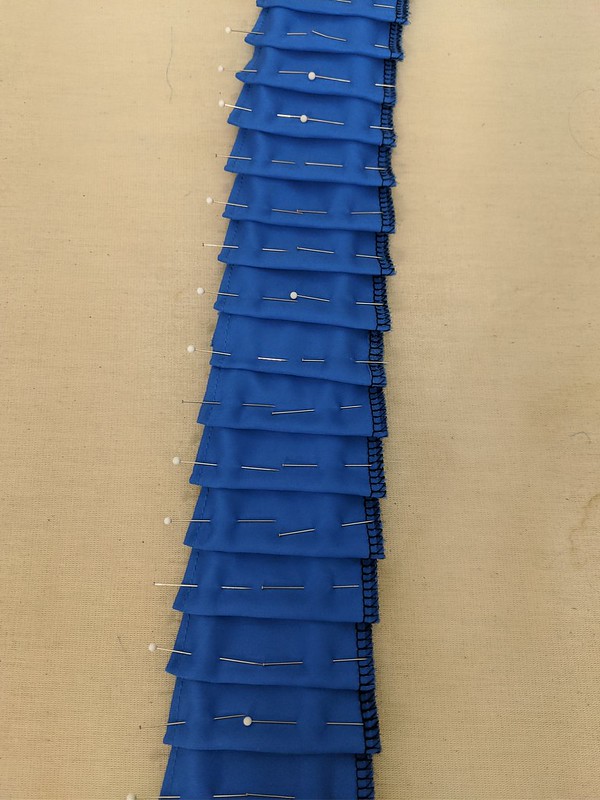 literally the total number of pins I own

I spritzed them with a vinegar/water mix and then ironed. I don’t understand the chemistry, but when something is pressed with vinegar that fold is never going to move! 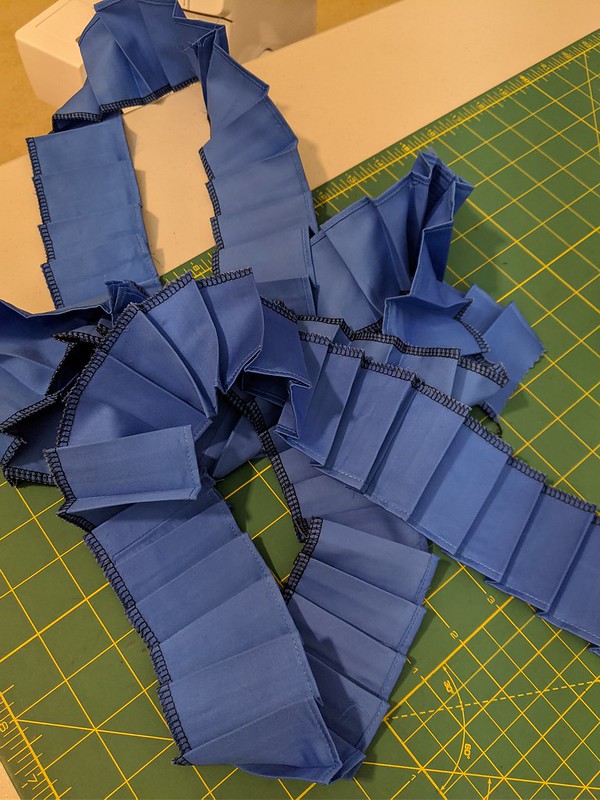 Pleats are whipped onto the bottom. 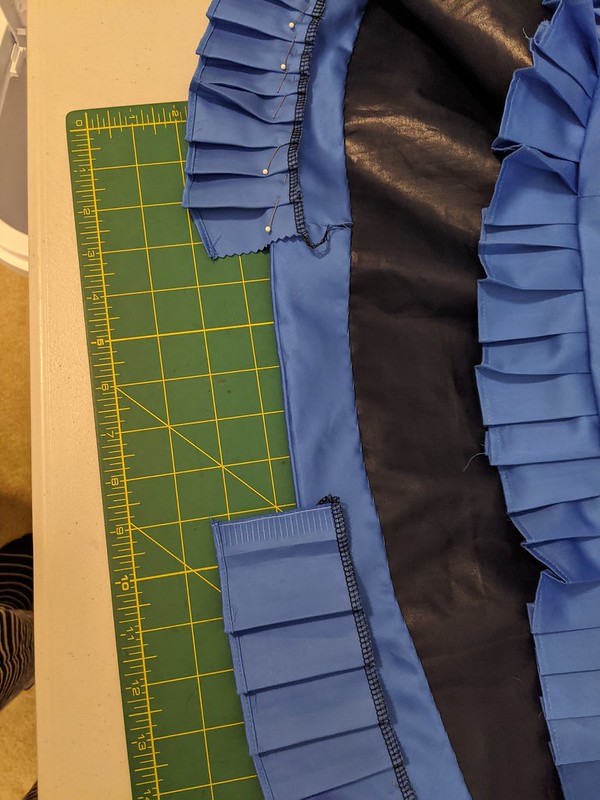 again, lots of swearing at this point

Had to go through all that effort of cutting/hemming/serging/pleating another strip to make up the last 8 inches! 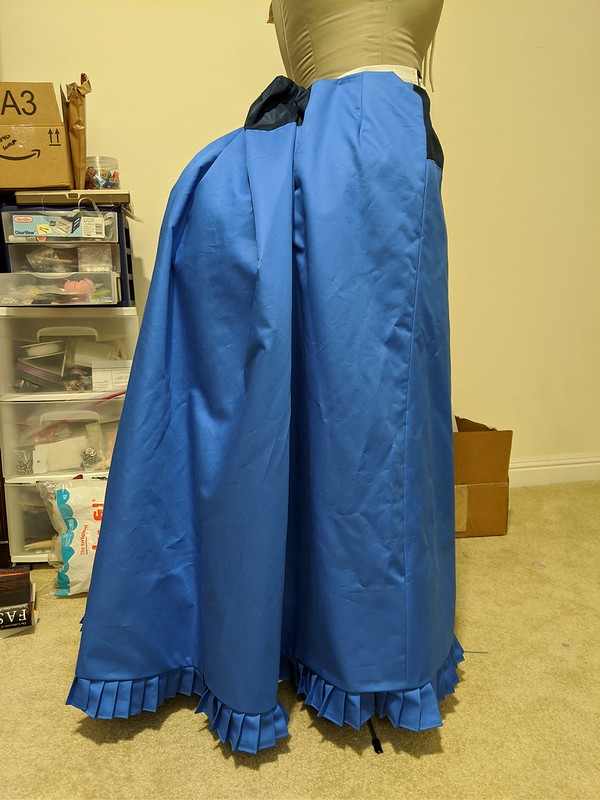 The top of the skirt is just folded over and whipped to a strong tape for the waistband. This is the historical method of doing a waistband – enclosing the fabric makes it harder to adjust, and also adds a ton of bulk at the waist. 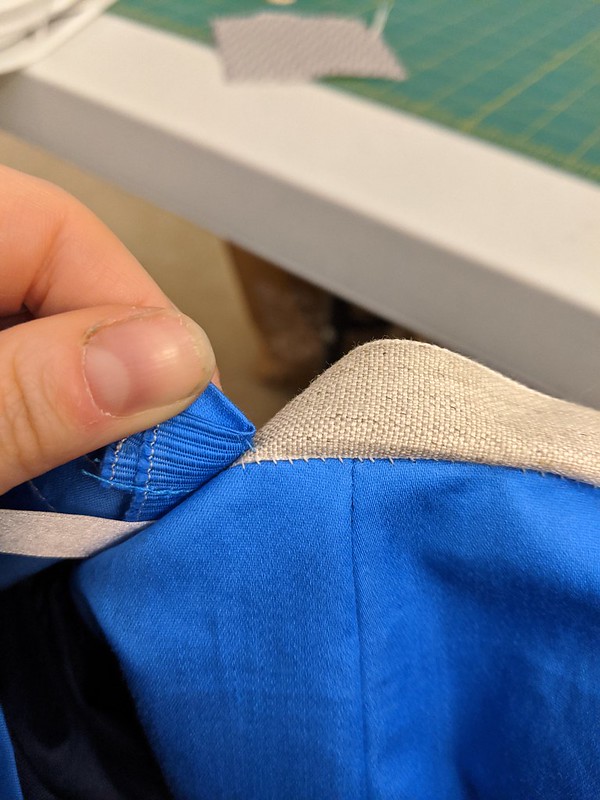 And underskirt done! Yes, this took me something like 1.5 months to do. And after all that it ended up being too long, and you will see my extremely ingenious fix in the next post. (Hint: safety pins).

This entry was posted in 1880s, Captain America Bustle, Fantasy/Scifi/Cosplay. Bookmark the permalink.