So, that Captain America bustle gown. For once, I decided to start with the accessories, because that’s what takes this from a perfectly nice bustle gown to the cosplay concept.

I wanted a quick and easy win, so I decided to start with the hat, because that doesn’t actually require any fitting and I could go straight into construction. (I had previously decided to outsource all millinery, but for a costume contest I’m better off making it myself. But any non competition millinery is going to be commissioned).

Note there are lots of ways to cover a hat. I went with what made sense to me, using a combination of the Truly Victorian instructions and instructions from when I took a millinery class previously. Note a great resource for hatmaking is “From the Neck Up: An Illustrated Guide to Hatmaking” if you are new to millinery.

Here are all the pattern pieces with millinery wire whipped on. I just use a doubled-thread and a regular whipstitch, nothing fancy. I left off the wire on the inner brim because I didn’t see a point to it, and I was feeling lazy. 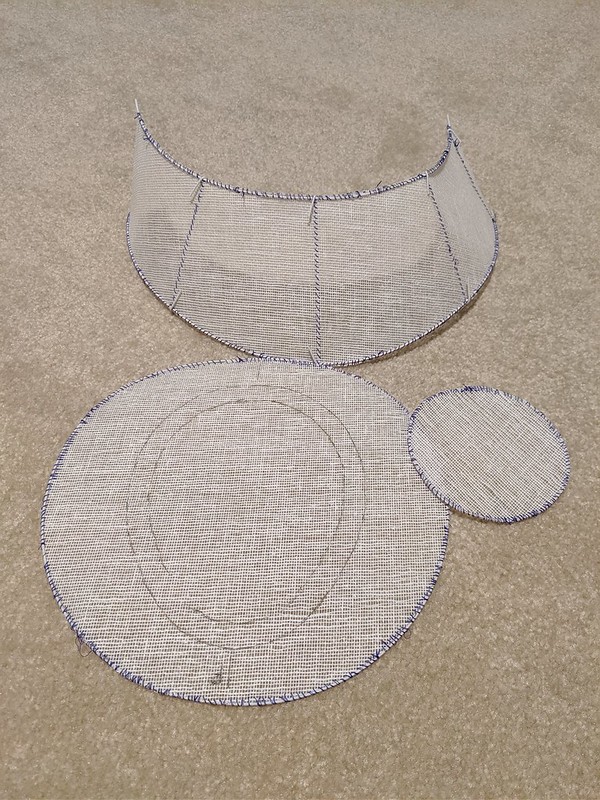 The pattern says you can leave those wires bent over the crown piece or cut them off – they were so obviously bumpy and showing through the fabric I don’t know why you would leave them, so I cut them off soon after. The pattern also didn’t specify whether the straight pieces on the crown and the outline pieces should be on the same side of the buckram or not. I put them on different sides which ended up also being a mistake – I recommend being consistent and having all wire whipped to the “inside” so nothing shows through.

Here is the first major pattern deviation, I added mull (mulling?) to all the pattern pieces. You can buy an actual mulling fabric, but I went with a cotton flannel which works just fine. 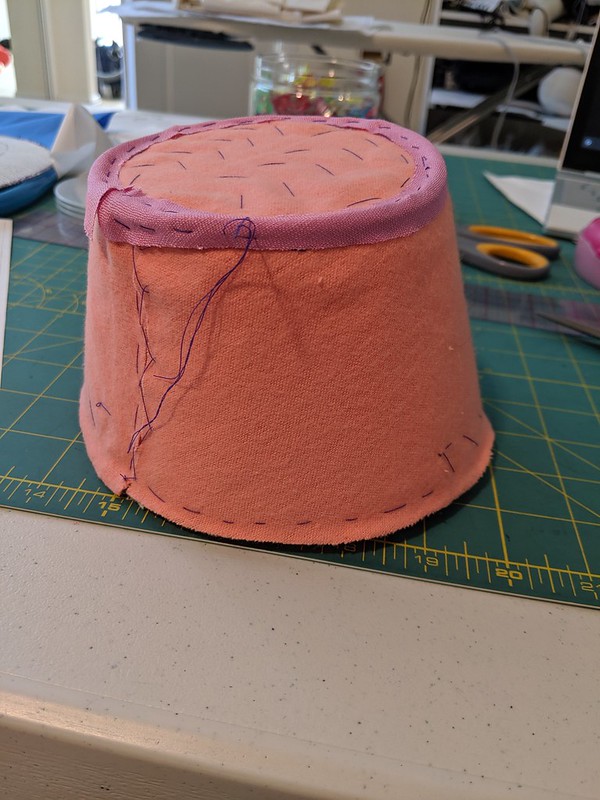 You can’t see the orange through my blue fabric, but match the fabric and thread to the outer fabric if you have something more sheer. I basted all this by hand, but you can use glue.

You really just want anything with a bit of bulk to it to hide the buckram and cushion the outer fabric. I also added some loosely woven bias tape around the corners/edges. This helps to soften the edges where the buckram is joined. They make an actual product for this, but no reason to buy something special when we all have fabric scraps to use up and I can’t remember what the product is called anyways. I highly recommend mulling your hats, otherwise you risk the buckram showing through the fabric. This really makes for a much more professional finish.

Finally purchased quilting clips! So much easier than pins for this kind of project. 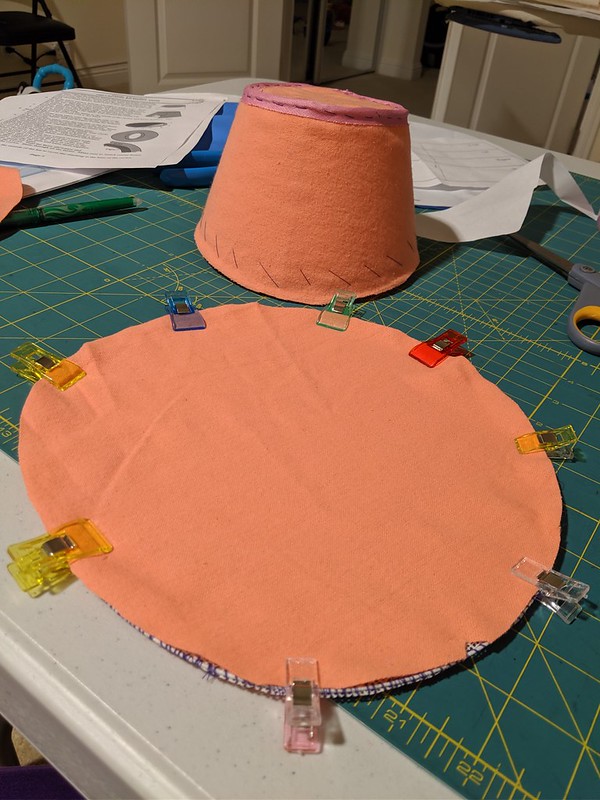 Brim with all the mull and bias tape basted on. 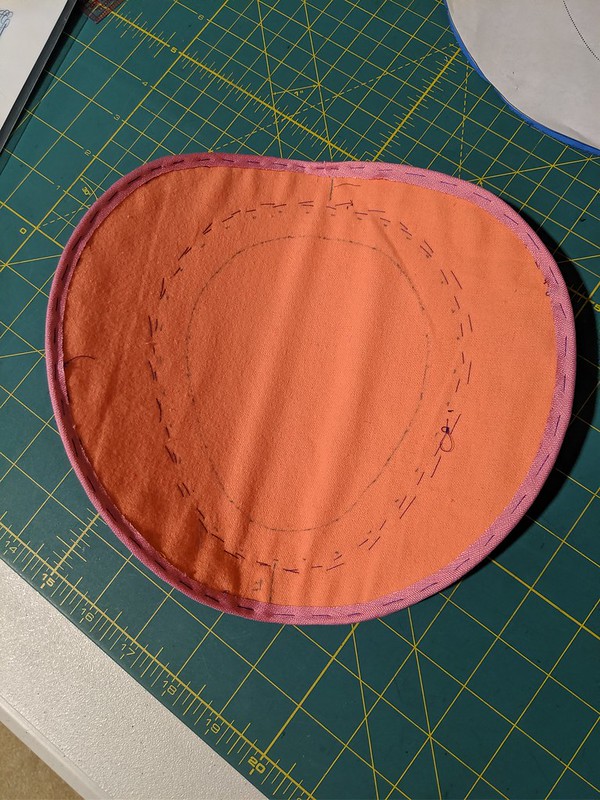 Crown with the fashion fabric prick-stitched on. Here’s where I made a silly mistake – after wrapping fabric around the top circle, I only cut out notches on half of it. So you can see some bulk where I didn’t cut the notches – it’s that line around the top. Seriously, why did I only do this on half? 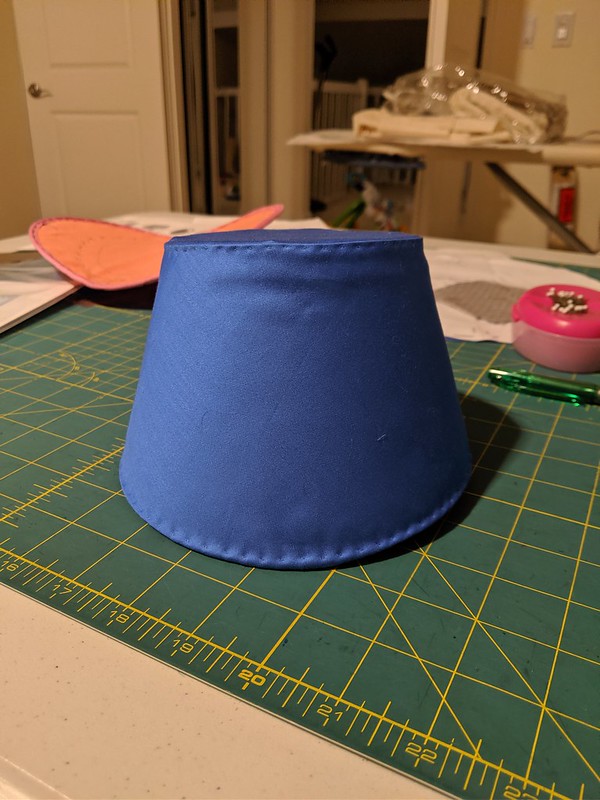 Same principle as clipping curves. Just do it around the whole thing?!?

Same piece from the inside. Pro tip, make sure your crown and top circumference are the same – I had a bit of difference so I really had to squidge (professional term there) it into place when whipping the two together, and it’s very minorly gapping in places. 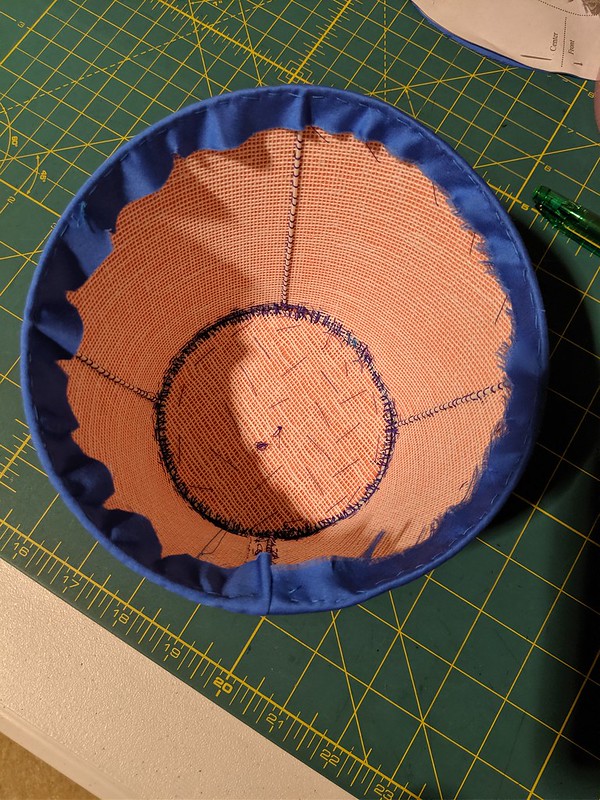 This is also where it would have been smart to have all the wire on the same side of the pieces.

I bent the brim slightly before adding the fashion fabric, to account for the fact that bending it makes one side slightly bigger than the other. If you added the fabric with the brim totally flat, it would pull on the bottom and wrinkle on the top (similar to accounting for turn-of-cloth in places like collars and lapels). 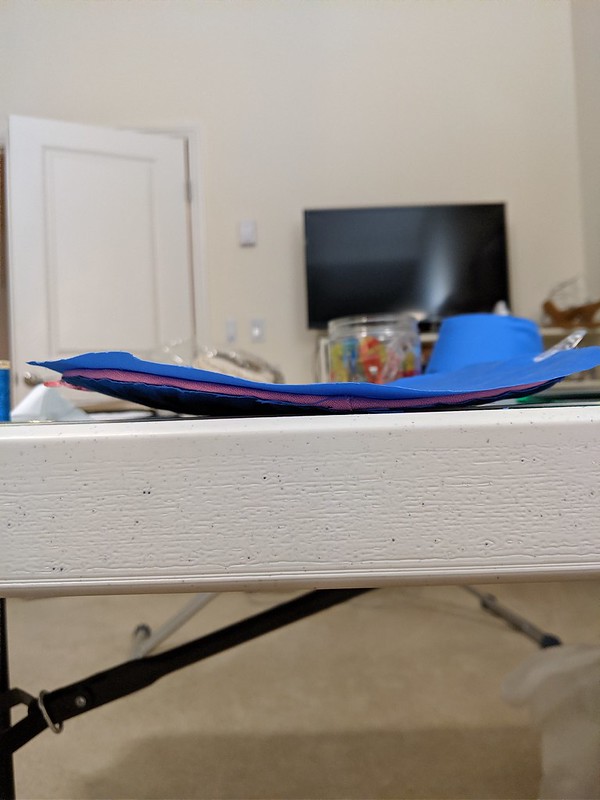 Another deviation from the pattern – instead of cutting the bottom circle bigger and folding it over and whipping it to the top piece, I finished the edge with a piece of bias tape. I would only do the pattern finish if you planned on covering that seam with some trim. 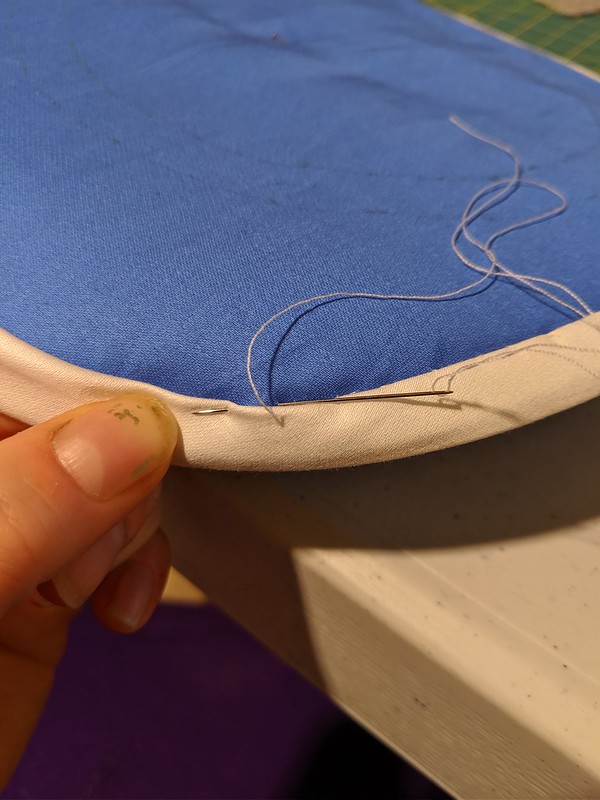 Keep your stitching close to the edge and come up through the tape, and this is a nearly invisible seam. 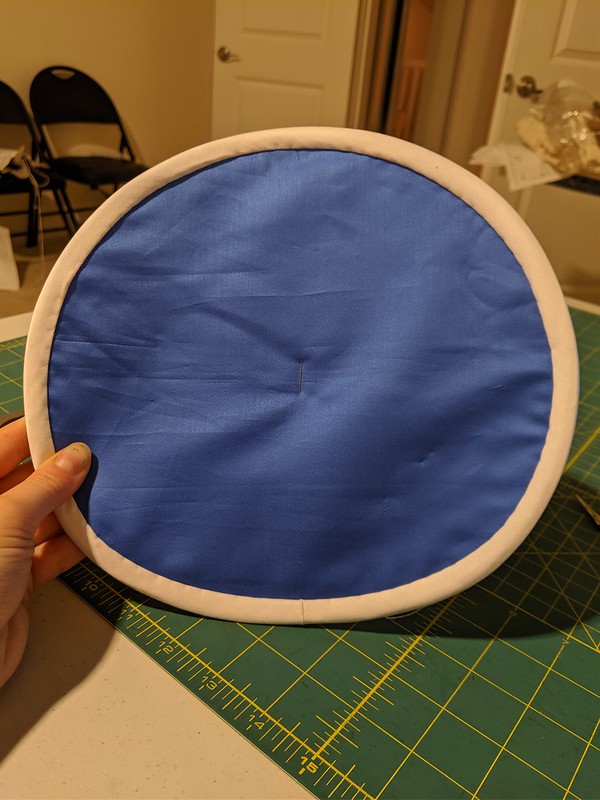 At this point the colors started feeling like a toothpaste advertisement.

Cutting out the center hole and all the tabs. 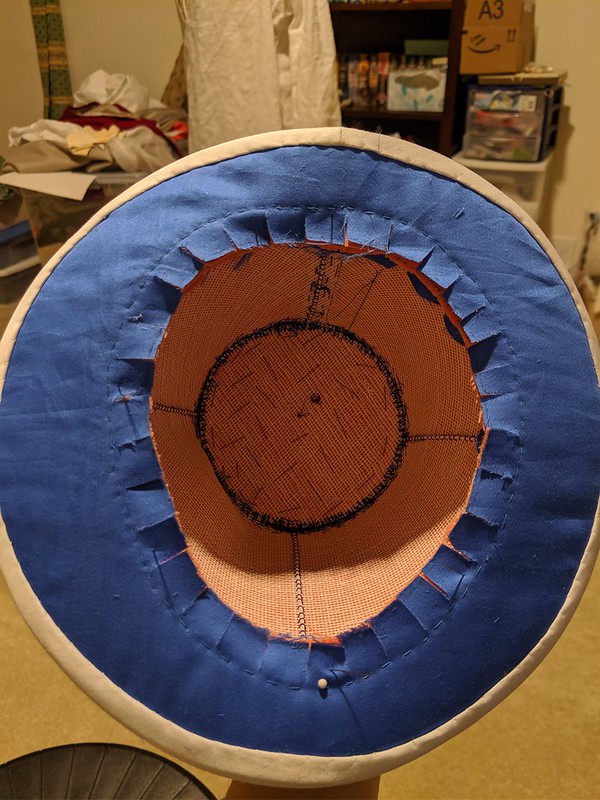 After all that effort to make tiny prick stitches, I ended up needing to do great honking big stitches to hold these pieces together because I couldn’t be accurate and delicate going through the tabs and the crown. You could add the crown fabric after this step to avoid this problem (again, many ways to cover a hat), but then it’s more difficult to handle that piece. I figured this will be getting a band around it to cover the stitches anyways, so ugly stitching didn’t matter. 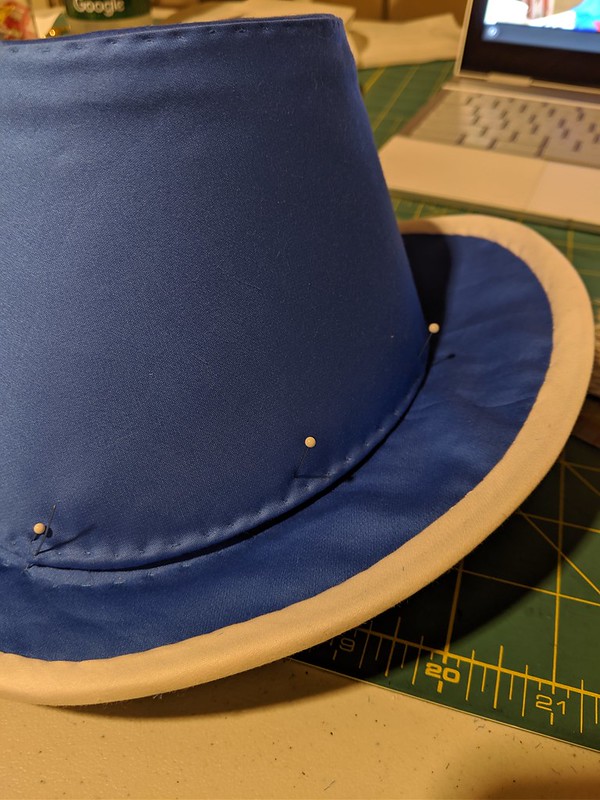 A finished hat, modelled by my water bottle! 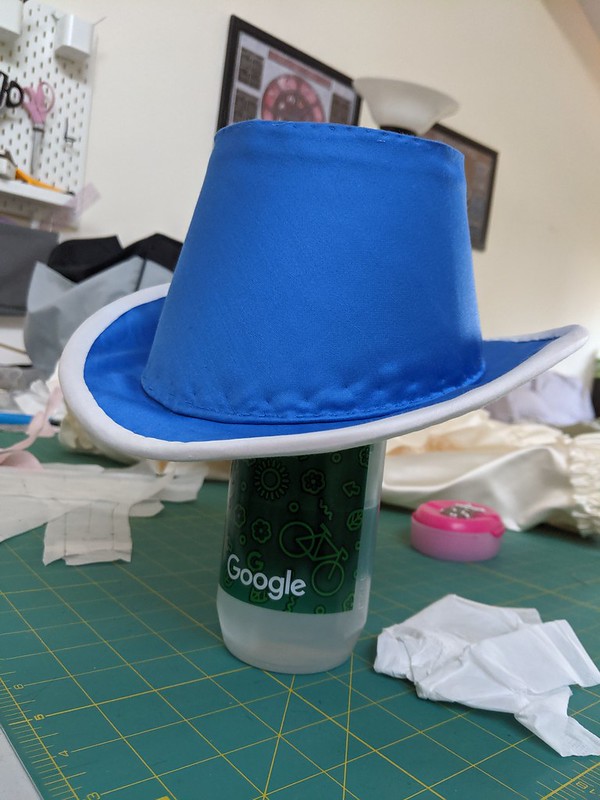 (Also, so much for quick and easy win, I think it took me 4 weeks to make this. Hence why I’m starting now for an April contest.)

This is going to be trimmed with feathers on each side, and a (likely removable) band with the ‘A’ on it to mimic Captain America’s helmet.

Ugh, and then on to work that actually requires difficult things like “fitting”.

This entry was posted in 1880s, Captain America Bustle, Hats. Bookmark the permalink.