Back in June I volunteered to be a pattern tester for the Augusta Stays, made by Scroop Patterns and Virgil’s Fine Goods!

I was very excited for this pattern, because my previous pair of stays (sheesh, 4 years ago at this point?) were more of an earlier style in terms of the pattern. While I can handle basic pattern drafting, I would have no idea how to draft those awesome swooping side panels so prevalent in late 18th century stays. 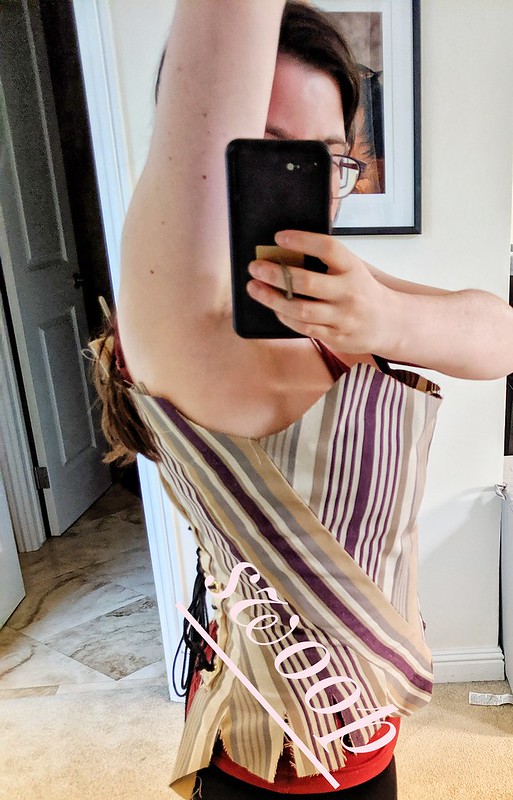 I had a week of planned vacation, so I figured that would be a good time to sit down and bang out a pair of stays, since stays are mostly just tedious (so many boning channels and eyelets).

And then the Small Human Being got a nasty ear infection, so I spent that week watching him instead and had to cut a whole bunch of corners in order to debut the new stays at Costume College… But details ahoy!

I chose the “straight” fit, because I am indeed shaped like a cylinder.

I initially tried a size 38 for the first mockup, but had a gaping bust like whoa. Turns out I had not actually measured my bust since stopping breastfeeding only two weeks before, and I needed to grade the bust down to a 36 😦  I knew I would have to take out length, because that’s what happens when you are 4’11”. Specifically, I took 2″ of length out (because I was scared to do more. Which somewhat came back to bite me in the end, which I’ll show later…)

COMPLETELY WRONG WAY TO REMOVE LENGTH FROM A PATTERN PIECE AHEAD:

Seriously, I know better. To remove length you need to actually remove length. Doing this alteration on a body would have you pinch out the fabric in a way that is parallel to my waist/the ground as on the right side. But I didn’t think of this at the time, and went on ahead with my mockup.

Taking out length meant the boning channels didn’t line up anymore, so I had to redraw most of them. 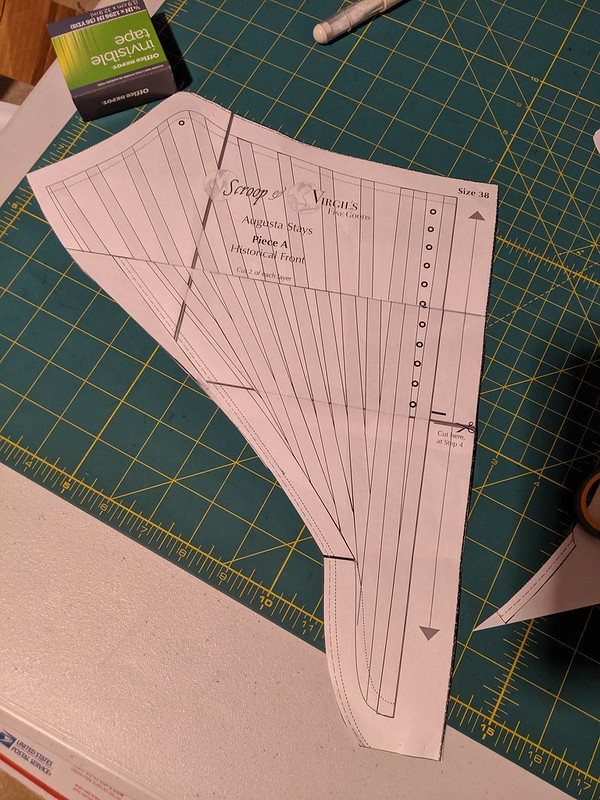 Easy to fox on the right, but check out the left.

For construction, I used 2 layers of linen canvas, and an outer layer of a finer beige/gray linen from Burnley and Trowbridge. I did the boning channels by machine with polyester thread, but the eyelets were done with linen thread from Larkin & Smith. 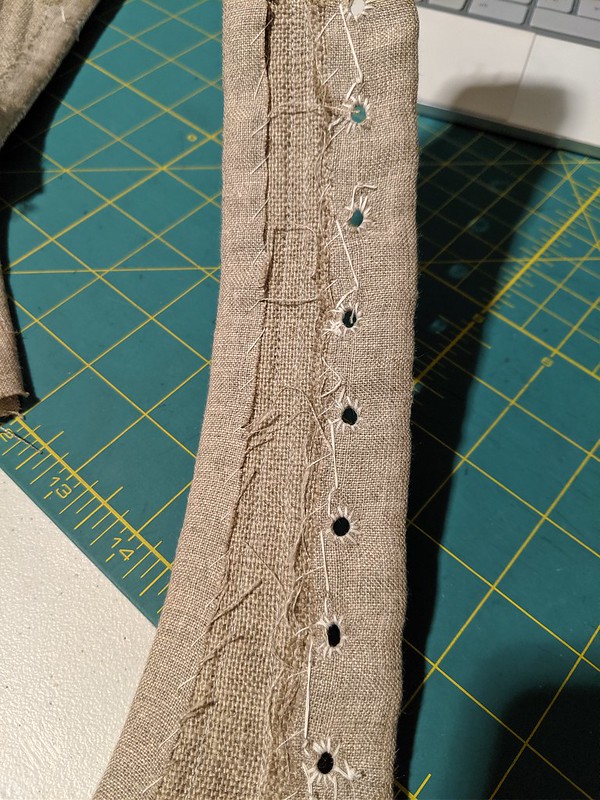 The importance of using a fresh piece of tracing paper! 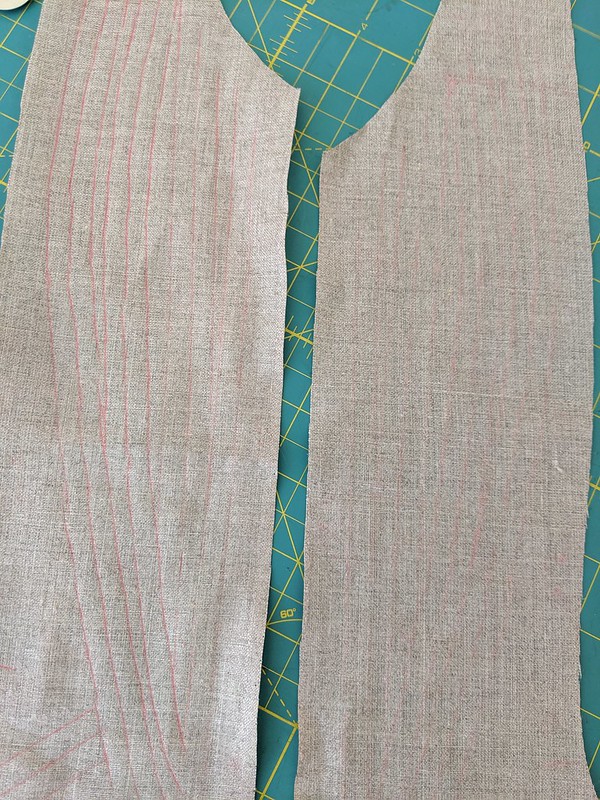 By the end I was in quite a rush, and I really wanted to get these wearable for Costume College to show them to Leimomi and Amber in person. So rather than binding the edges, I just folded the seam allowance around to the back and backstitched around the edges. 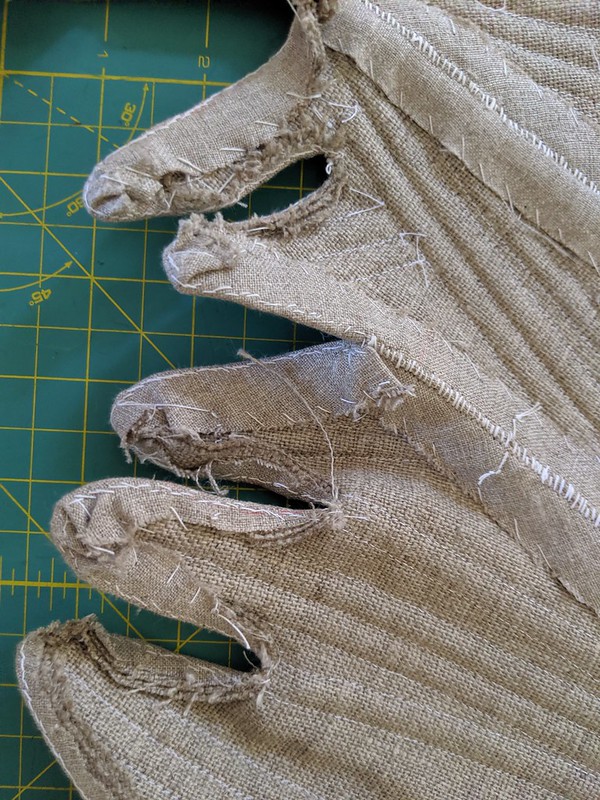 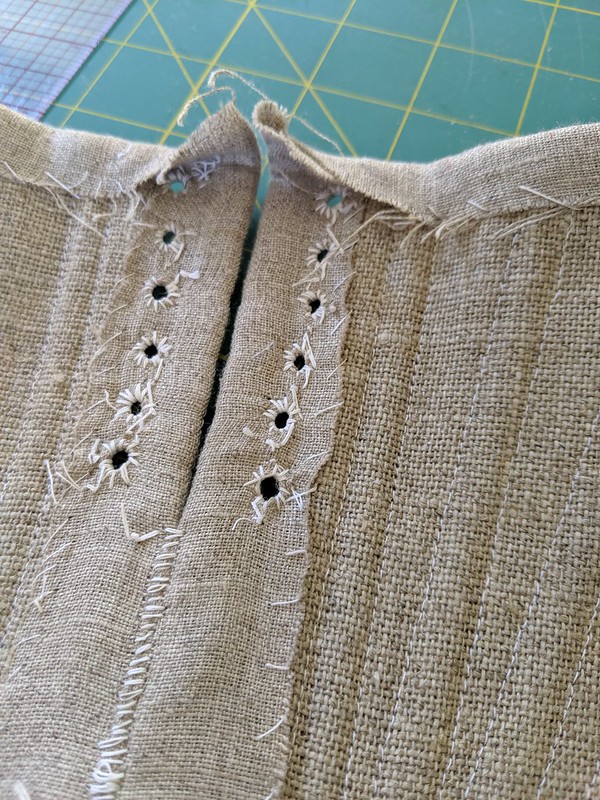 I wanted to show the stays at Coco – and I also needed my hair curled for the gala. That led to this hilarious trainwreck (in a good way!) of an outfit: 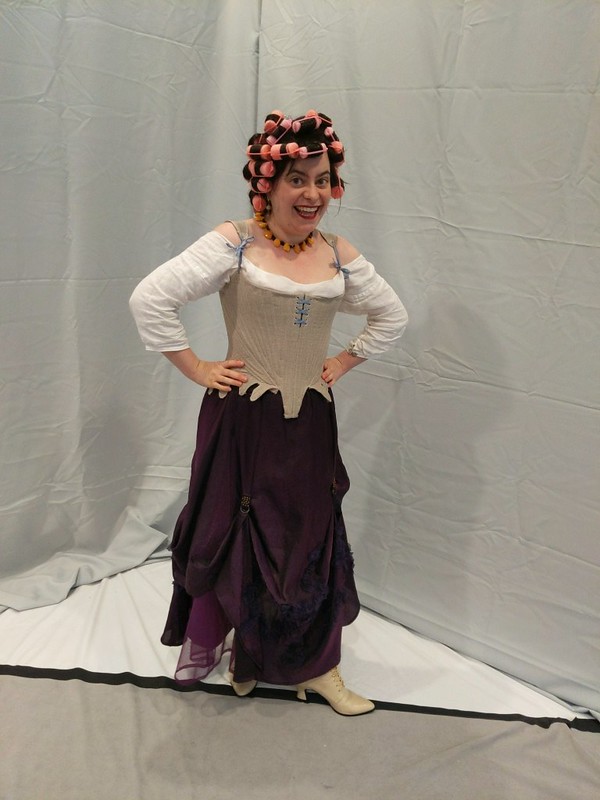 Wearing the stays for ~6 hours at Costume College ended up being very useful, since I discovered these need some changes to be fully comfortable. Namely, they were way too tight on the hips and started digging in by the end of the day. I really needed that extra inch of length removed that I had been too nervous to do in the mockup. The easy way to do this would be to slit the tabs higher. 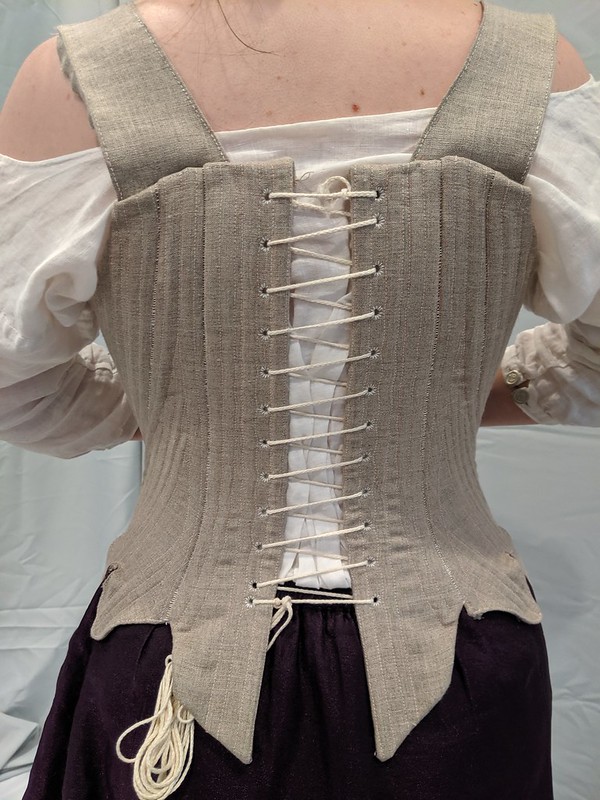 This is actually pretty good waist emphasis for me! I’m impressed how curvy they look.

However, there is another fit issue. Look how oddly tilted they look – it looks like the stays should get a good hike up the back, but that can’t actually be done.

There is also a huge gap between the straps and the stays front, which shouldn’t be there given that I have way less length over my shoulders from back to torso than the average-heighted person. This comes back to my utterly bonkers decision of shortening the stays parallel to the grain instead of parallel to my waist.

So rather than finishing these off and then never wearing them, I’m going to suck it up, re-alter the side panel patterns properly and redo them. That’s still faster then redoing a whole pair of stays in the future! I think I can get away without redoing the front or back, which means I won’t have to redo any eyelets.

Final thoughts: If you are just looking for historically accurate construction methods, there are a lot of friendly neighborhood bloggers who have already posted this information and you don’t necessarily need to buy a pattern for it. But, if you are an 18th century novice, there is way more detail and instruction here than in any free blog tutorial, and the instructions are really well written and clear.

The pattern itself is absolutely worth it – this is the only historically accurate pattern for late 18th century stays (Larkin & Smith is earlier, and JP Ryan is not HA) that I know of! It’s ideal for a less experienced sewer due to the straight and curvy fit options, which minimizes the grading or alterations you have to do. You’ll find it more tricky if you are way short (or way tall probably), but that would be the case for any pattern on the market. Stays are ideal to get in e-pattern form, because stays are so few pieces to tape together! In conclusion, this is probably the best stays pattern on the market, so I recommend buying it if you want to make your own stays!

*I received a tester version of this pattern for free in exchange for testing, but all thoughts and opinions are my own! I was not required to write this blog post in any way, shape, or form.

This entry was posted in 1700s, Corsets, Georgian. Bookmark the permalink.