Hello blog! This time I have a real excuse for not posting, and that’s the 7 months old baby! (the crossouts tell you how long this has been in draft). There are a lot more photos and construction steps I wanted to include about this costume, but if I did this would literally never get posted so off we go!

In the meantime, let’s have a retrospective to Jordan Con back in April, when I was a well-slept and well-showered 6 month pregnant lady.

It was tricky figuring out what costume to make for the competition, since it turns out there are not a lot of pregnant women in fantasy. I almost did Daenerys eating a horse’s heart from Game of Thrones (started buying materials and everything), but then started feeling meh on the idea.

I had vague plans about doing a Rey costume after The Force Awakens came out, but seeing The Last Jedi (which I absolutely adored, you can fight me over this) over the holidays solidified those plans. As a bonus, it would involve some propmaking (which I’d like to get better at) and was not Wheel of Time or Brandon Sanderson related (I’d really like to see the Costume Contest at Jcon branch out from those.) After seeing someone else do a Rey maternity costume, that nailed it for me as well.

The good thing about Star Wars costuming is there are people on the internet as obsessed with screen-accuracy in their costumes as I am about historical-accuracy in my usual stuff, which meant I didn’t have to do the research!

In this case, I lived in the Rey Cosplay Community group on Facebook for months.

I tried to keep a list of everything I purchased to see what the actual cost of this costume ended up being. I have exact numbers for the stuff I bought online, but I’m only guessing where I bought things in stores locally.

I bought this shirt off of Amazon in a size large to make sure it would fit my stomach. Then I took off the buttons and sewed the placket partially closed. Super easy! I printed a picture of BB-8, stuck it under the shirt with some bright lights, and painted the black outline. Then I came back and painted in the orange and silver parts. In retrospect, painting it was a silly choice (since the fabric paint is hard to get even, and splits when the shirt stretches) and I should have just used fabric markers.

I also bought a foam half sphere, cut it in half and painted it to look like BB-8. This got two safety pins glued on, and was then pinned to my shirt

I bought cotton crinkle gauze from fabric.com. The movie version doesn’t have a seam, but that would mean buying so much yardage and having a bunch left over. I went for half that much and have a seam at the bottom of the loop near my calf where no one should see it. The other ends are all left raw. This was my second ever attempt at dying – I used RIT liquid taupe dye. It turned out to be the perfect color!

The wrap is gathered where it would hit my shoulders and tacked by hand to a piece of twill tape. The twill tape has snaps which attach to the shoulders of the shirt, so the wrap stays nicely in place.

These are very straightforward pants, except for the color. Like the wrap, the pants are also a shade of taupe, but a darker shade. Taupe is a seriously annoying color to dye for – depending on the lighting it can look much more gray or brown. I used Dharma raw silk (raw silk was used in the movie), and proceeded to dye a bunch of test squares. I started by mixing tan and gray liquid RIT myself, but kept ending up with shades that looked vaguely purple (presumably the gray was blue-based). Then I bought more taupe dye that I used for the wrap, and just used a higher concentration of it. Despite that, the pants are way too brown/purple looking, even though they used the exact same dye as the wrap. Just shows what dying cotton vs silk does. One day I’d like to strip the dye out and try again. Maybe in time for Costume College?

The pattern itself was quite straightforward. I started with my pants sloper and added extra to the sides and a ton of extra to the top to make sure it would fit over my stomach. The top is just a drawstring to be adjustable, and the legs are finished with long strips which wrap and tie around the top of my calves. And of course I added pockets!

These are cotton bandages from Amazon which I tea-dyed to make a wee bit darker. The screen accurate bandages are from Boots, a store in England, but they don’t ship to the USA. I was originally going to tack them down to stockings so I could have an armband to slip on and off, but I realized I would need to have someone tack it down while it was on my arm, because the bandage wouldn’t hold its shape off my arm. Since wrapping it isn’t that much effort, I just re-wrap them every time.

By far I took the most pictures of the boot-covering process, probably because I did these first. The official screen-accurate boots can be purchased from Pozu, but I didn’t want to spend $200 on boots (that amount of money is for silk purchases only). I bought cheapo suede/fur boots from the internet, and repurposed the heavy wool fabric I had bought for that Daenerys costume to cover them. I also bought brown leather for the backs. 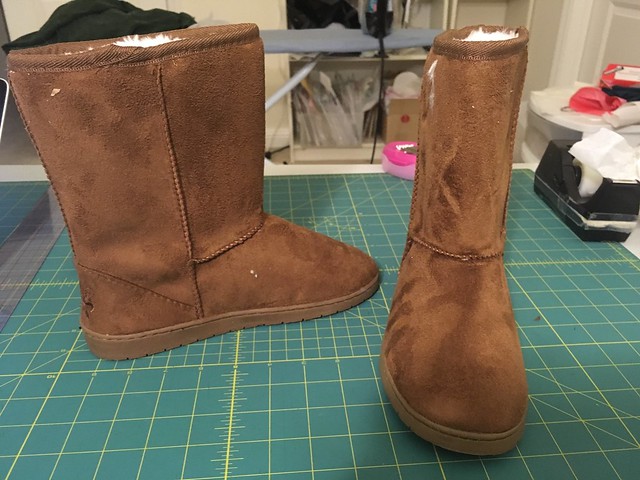 I started by cutting out the seams at the sides: 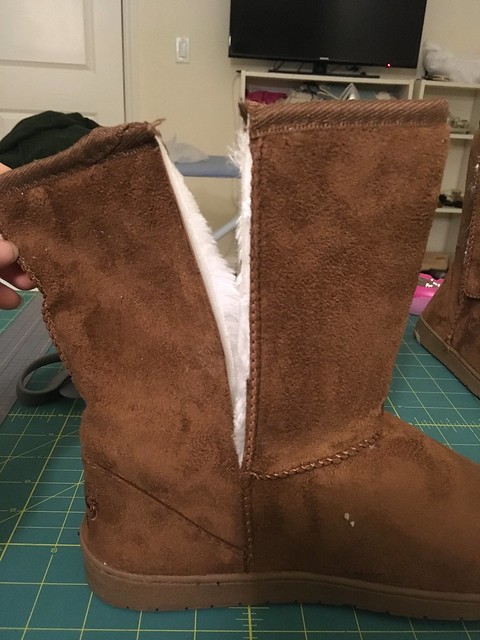 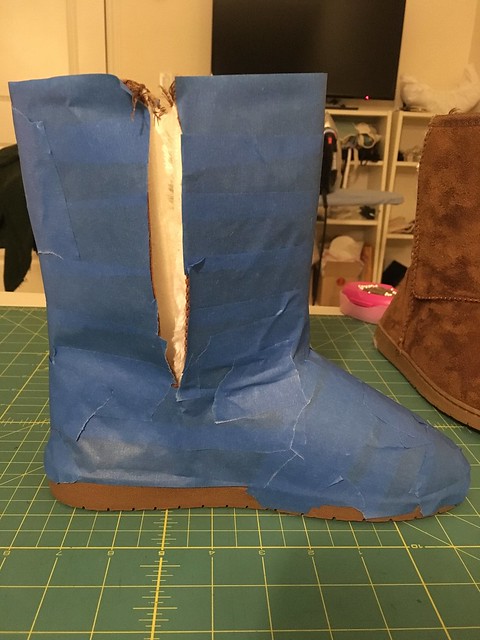 The leather thingie that goes up the back. This was my first time sewing leather. You MUST get a leather needle and either use a walking foot or put a piece of tissue paper or sand paper between the needle plate and the leather, otherwise it will stick 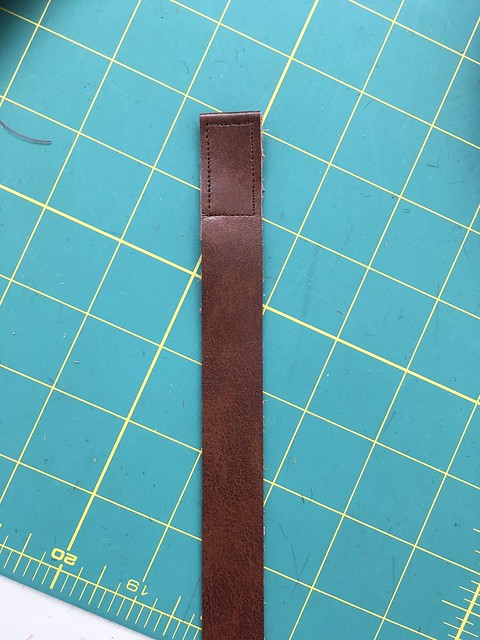 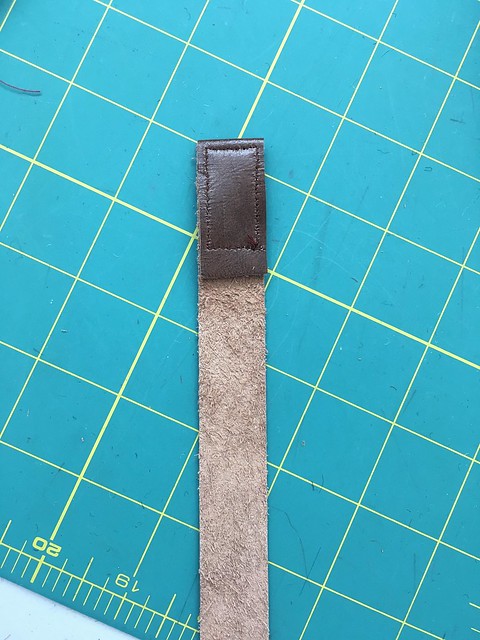 The covering for the back half (with the leather bit from above already glued on). This just got slipped on over the boot and glued down with rubber cement: 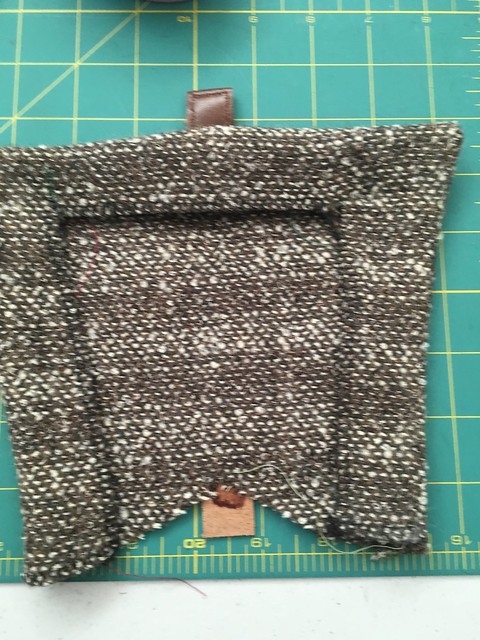 View from the opening of the boot: 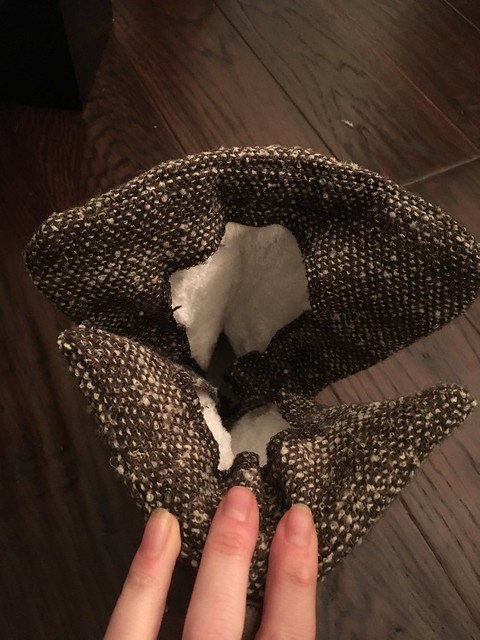 Front and back fabric pieces glued on. The visible part at the bottom back of the boot will eventually be covered by leather: 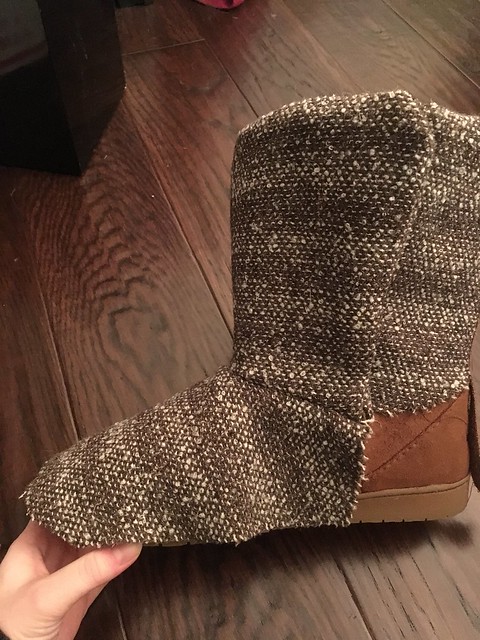 I had a piece of white leather that has been in my stash for so long I have no idea what I paid. I think I bought it off someone on livejournal a decade ago? I used a free online pattern. I used leather dye to paint it brown (it ended up a bit too dark for my taste). I bought a piece of thin leather in the right color which is glued to the backside on just the narrowest part where it will show on the wrist. And yes, it wasn’t until I had made two of them that I realized Rey only wears one wristband. 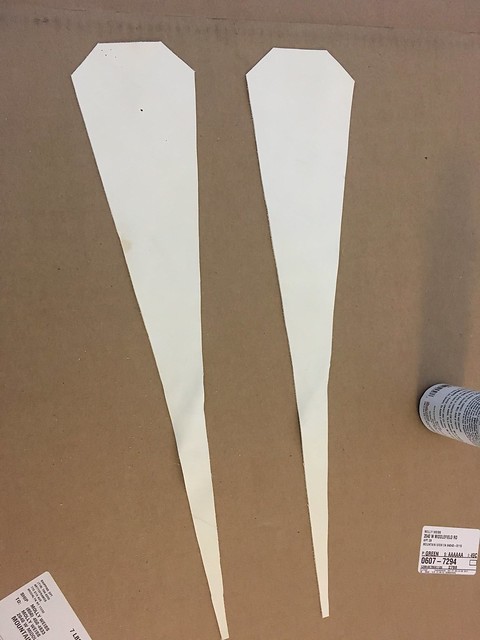 And now for the trickiest part for me, the staff:

I have an awesome coworker who had 3D printed staff pieces for his own Rey costume, but since he never got around to making it he just gave them to me.

The original staff is around 6″ long, while Daisy Ridley is around 5’6″. I scaled down the staff length to be 5’6″ so I would have the same scale of the staff being taller than me, but not by an absurd amount.

Here I laid out the pieces to figure out the order, as well as the distances between them. 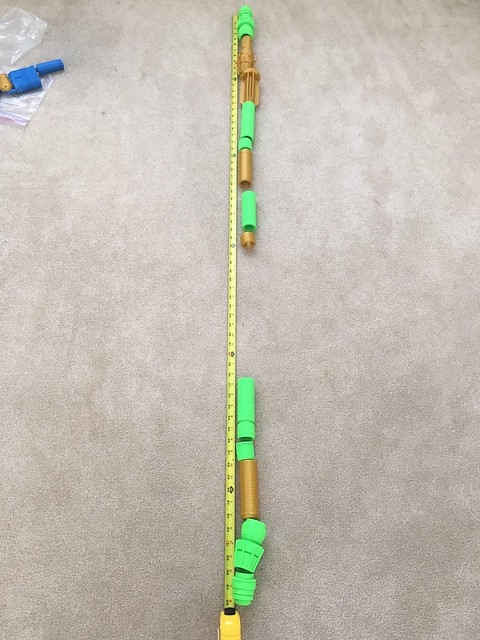 I bought some PVC pipe and had the hardware desk at Orchard Supply Hardware cut it into two pieces, since I knew I would have to get this into a checked bag. I also bought a PVC connector piece that I could use to re-join the pieces once I got off the airplane. I could hide the join at the place where the fabric wrapped around the staff. Then when I got home, I discovered that 1″ PVC referred to the inner diameter, not the outer diameter, so it was too wide.

Back to the hardware store, and this time I bought a plain wood rod which was 1″ across. I also found a connector-ish piece that I figured I could work with. My other wonderful coworker (who 3D printed my Melisandre necklace last year) who occasionally dresses up as a Jedi himself put some screws through the parts, and by removing and inserting the screws I was able to break the staff down and put it back together.

Time to put the pieces on!

Aaand half the pieces didn’t fit.

In retrospect this isn’t super weird – 3D printing isn’t entirely accurate and if this was being very precise about the measurements, it could easily be off by 1mm (which it was). At first I went to town with a file and some lube (yes, that’s what she said, sigh), but that resulted in pieces that got stuck partway up the staff and I had a hell of a time pulling them back off. I ended up frantically emailing the first coworker who printed the original pieces, who sent me the files, which I sent to the second wonderful coworker who printed me new pieces.

That left me with about 3 days to glue on the new pieces and do a couple coats of spray paint. (PANIC PANIC PANIC)

Here’s what it looked like after the first coat of black spray paint: 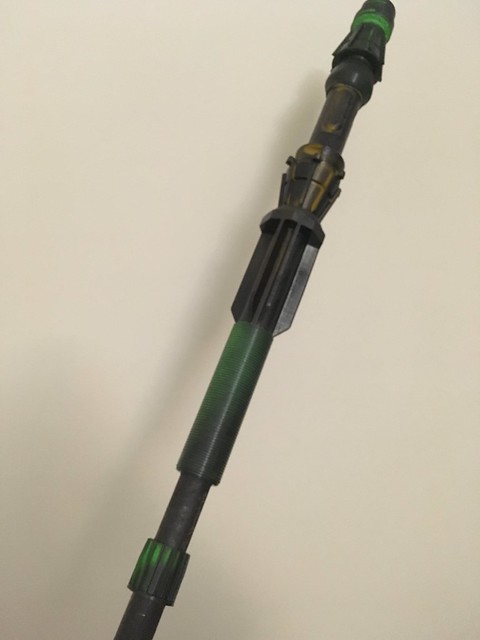 I bought the staff strap from etsy because I was running low on time and really did not feel like making it myself!

The fabric strips are some random scraps from my remnant box.

Staff cost: unused pvc + wood dowel + spray paint + metal file + sanding attachments for my drill bit + hardcore glue = I didn’t save this info at all, but I have to imagine it ended up around $40? And the strap from etsy was $53 (not going to complain about paying other cosplayers for their high quality products) = $93

(sheesh and I thought this would be inexpensive compared to yards of silk. Stuff adds up. Especially when you are embarking on a new part of costuming such as propmaking where you don’t have all the supplies…)

Alas, as is so often the case, when it came down to the final product it doesn’t really get across how much work the whole thing took and looks fairly simple. Oh well. Still,

I didn’t place at all for the official costume contest awards, but I was tickled to come up for the applause voting for audience fan favorite! Came in second to a truly excellent costume that no one but Wheel of Time nerds will understand. 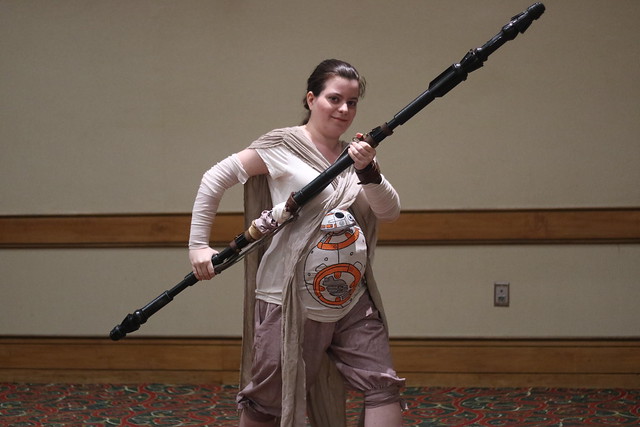 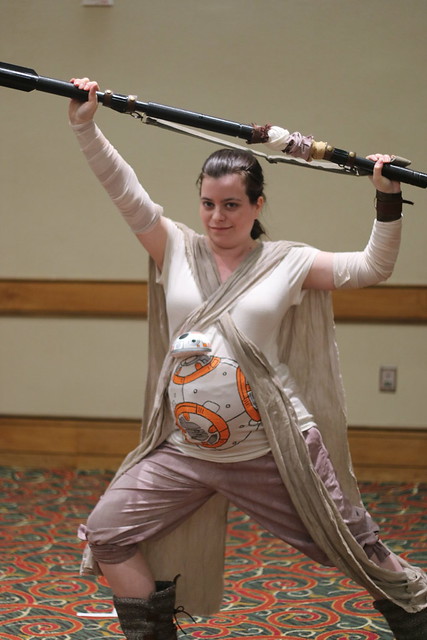 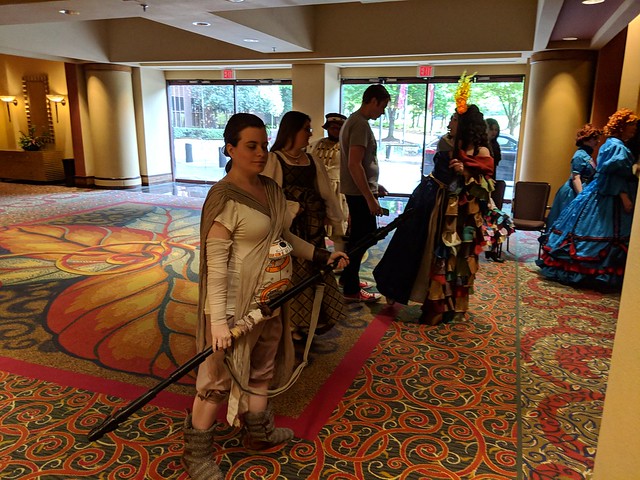 Getting all zen or something while waiting for the results of the costume contest. Also, the photo that makes it obvious I was pregnant. 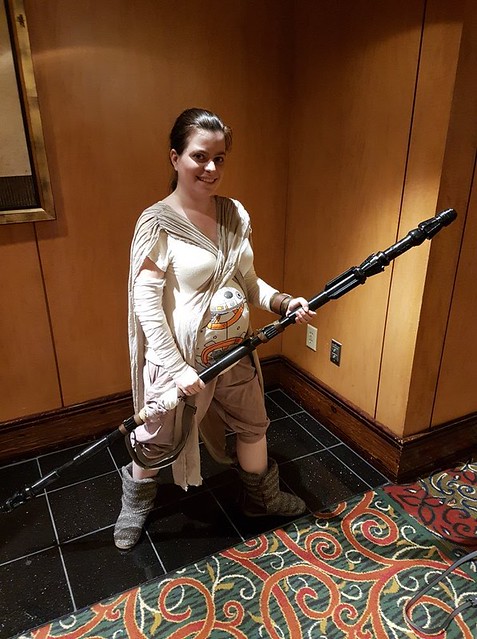 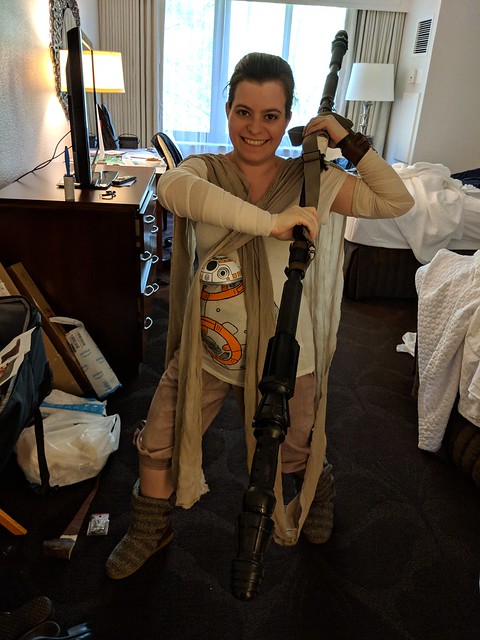 And once I de-maternity-ify it, this will be perfect for my costume for the Thursday night pool party “Garments of the Galaxy” at CoCo 21019!

This entry was posted in Fantasy/Scifi/Cosplay, Rey and BaBy-8. Bookmark the permalink.