The Greater Bay Area Costumer Guild put on a regency event called Wine & Peace at Wente Vinyards. Despite the fact that 1) I can’t really drink right now and 2) I don’t really like regency, I hacked together a regency dress in about 1.5 weeks so I could go in costume.

Turns out since regency dresses make everyone look pregnant, they are really great for when you are actually 5 months pregnant, and entirely hide that fact! And I had some super helpful friends to be my designated drinkers aka stunt livers.

I was also able to use this as an assignment for the Intermediate Clothing Construction class I’m taking right now, so win/win situation all around!

I have no regency undergarments, but this era looks decent over a pushup bra, so I went with that and a tank top instead of trying to also make stays (remember, hacking this thing together). Instead of buying a pattern, I drafted something based on this wonderful description of how a bib-front/apron-front gown works from The Hungarican Chick.

Drawing by The Hungarican Chick

The only fitted part here is the back, and that’s just princess seams! So I pulled out my fitted sloper, and played around with it until I had a empire princess back and something that fit over my front with one small bust dart. No pictures, cause I was in a rush.

For the sleeve, I turned my sleeve sloper into a two piece with a poofy part up top and fitted down below.

My fabric was a mystery burnt-orange from Fabmo that I got for $10 total. I suspect it’s a silk or a silk blend based on the feel (but haven’t done a burn test), and that it is also a sari, given that it was only 36″ wide. I thought I had 5 yards, but it turns out I had more like 4, which was slightly problematic in the end. I was only able to make the front skirt half as wide as I wanted, and I had to piece it with a seam right down the middle. I also had to piece the apron front together from scraps. Despite my measuring, the dress ended up about 2″ shorter than I would have liked. The whole thing is entirely machine sewn and serged wherever possible. 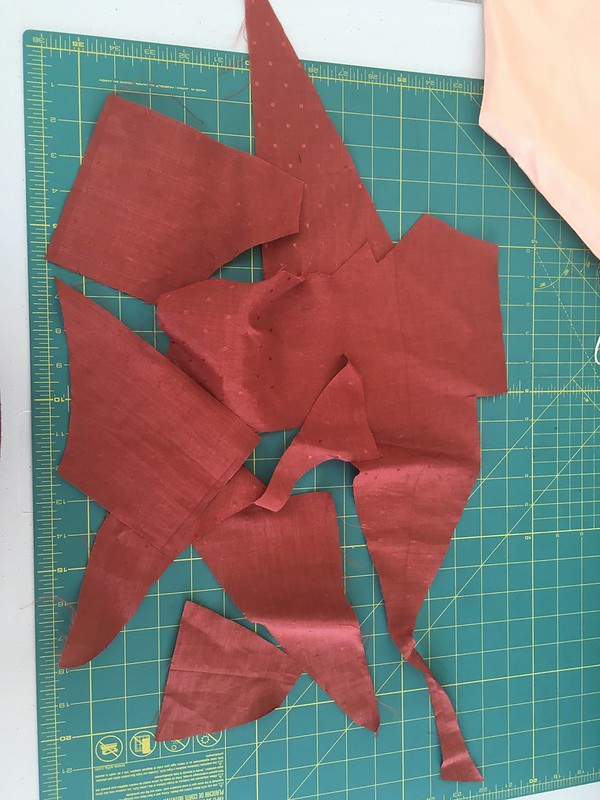 Literally the only scraps I had left when I was done. 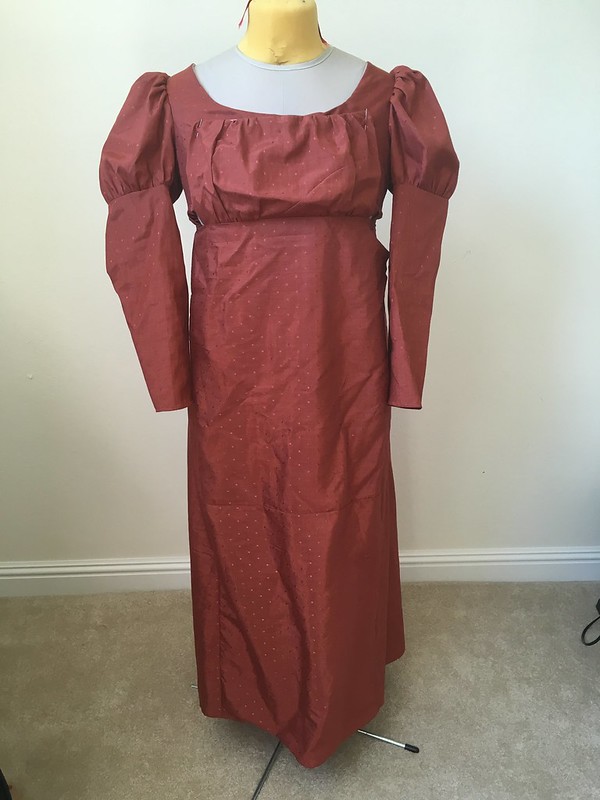 From a few feet away, you can barely see the piecing in front! 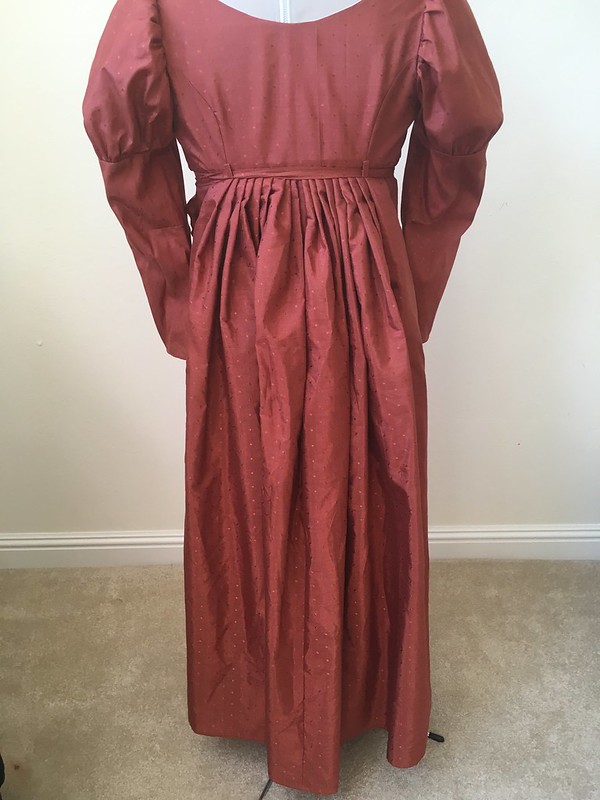 And some closeups to try and explain how a bib-front gown goes on (although I think it’s better explained from the linked website above): 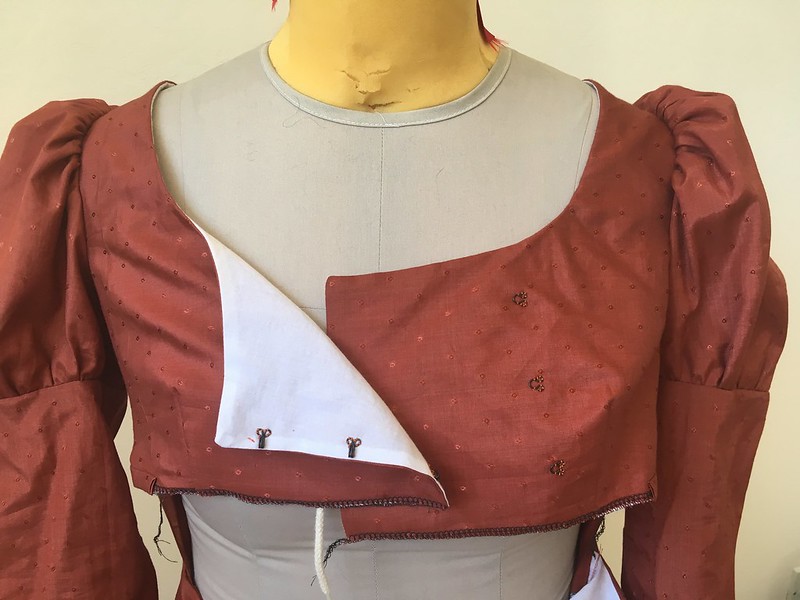 First the bodice closes in front in some manner, I used hooks and eyes. I may try and add a band under the bust to stop this from riding up, which it really likes to do. 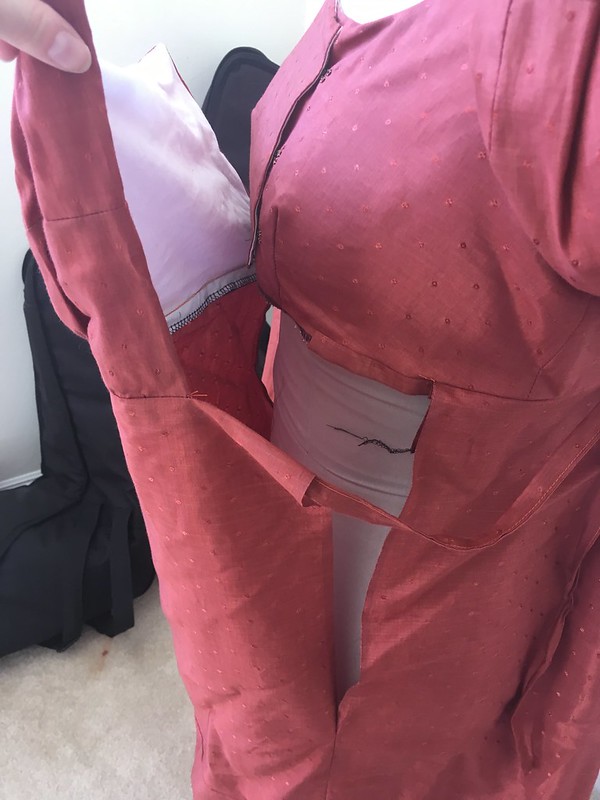 The front comes up and the ties are brought around to the back. 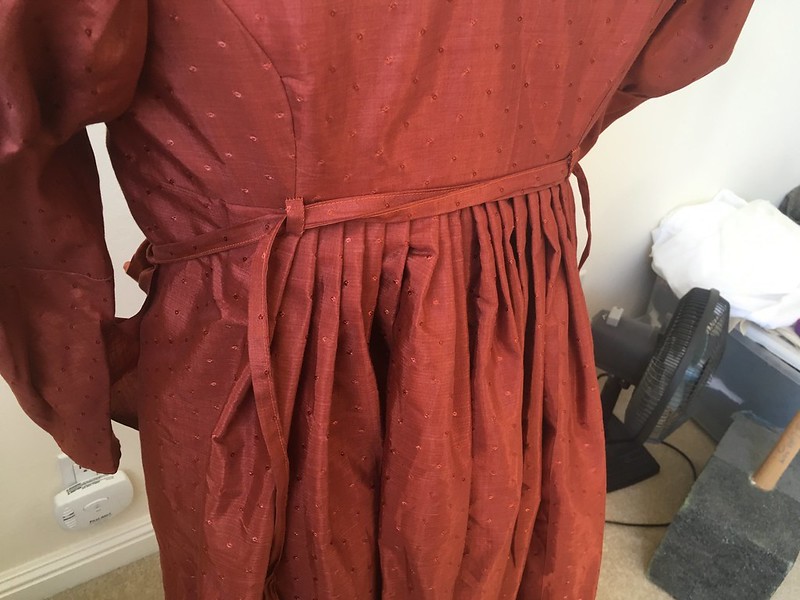 Where they go through loops on the back (in order to stay up) and criss-cross back around to the front. 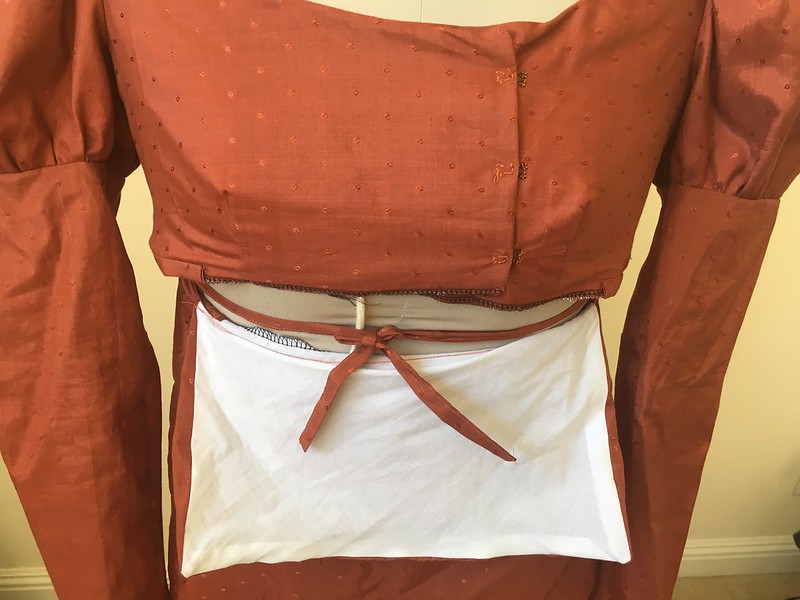 Then tie under the front to hold it secure. The apron is hanging down at this point, but the skirt is in place. 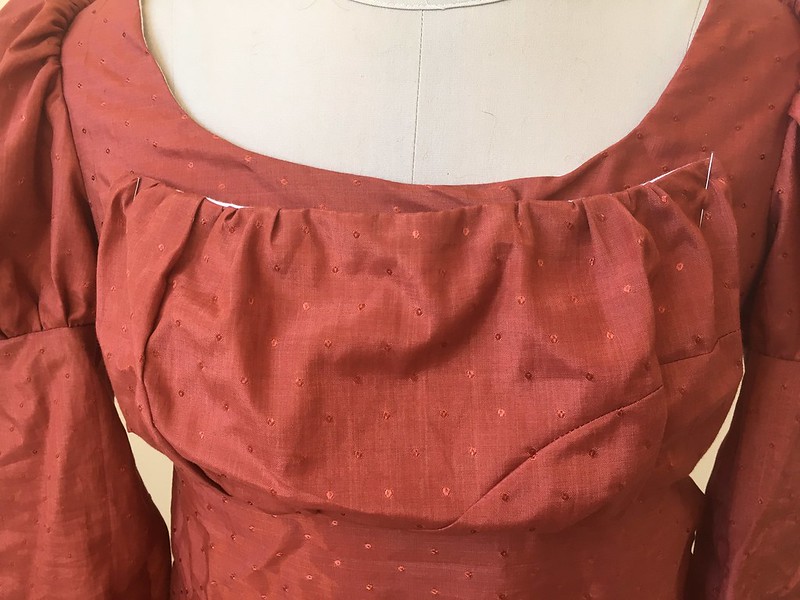 The apron is flipped up, and buttoned or pinned into place! I really need to trim down the neckline of the under-bodice, since it shouldn’t be showing above the apron. You can also see the piecing I had to do since I had no fabric left which was big enough!

One day I want to mess around with the apron, since I gathered it at the top and bottom right above and below the bust to the lining. Except I should know better than that, because that doesn’t create a nicely gathered bodice the whole way through. It’s just going to pooch across the whole thing (which is what it is doing). I’m thinking of either adding tucks, or gathering/ruching the entire thing all the way across. 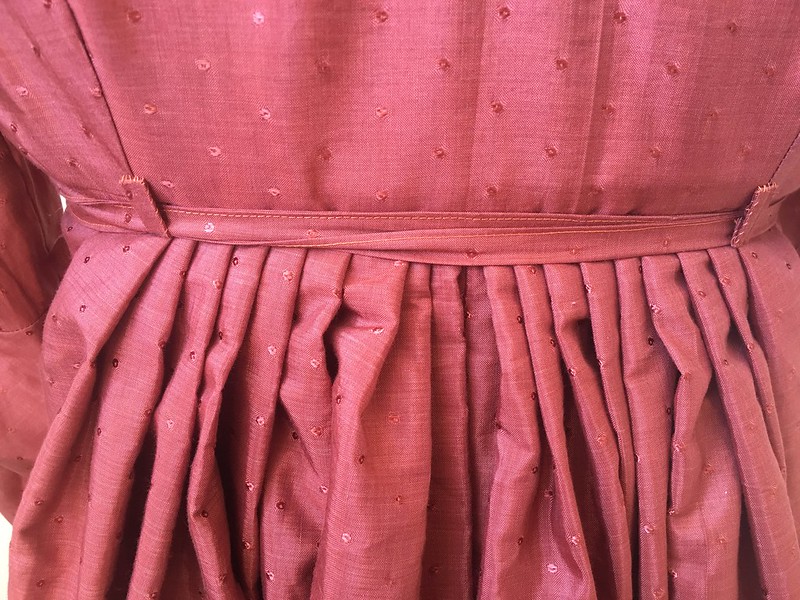 Closeup of the pleats, since I like how they turned out. Because they are friggin knife pleats, I had to rip them out several times before it ended up looking nice… 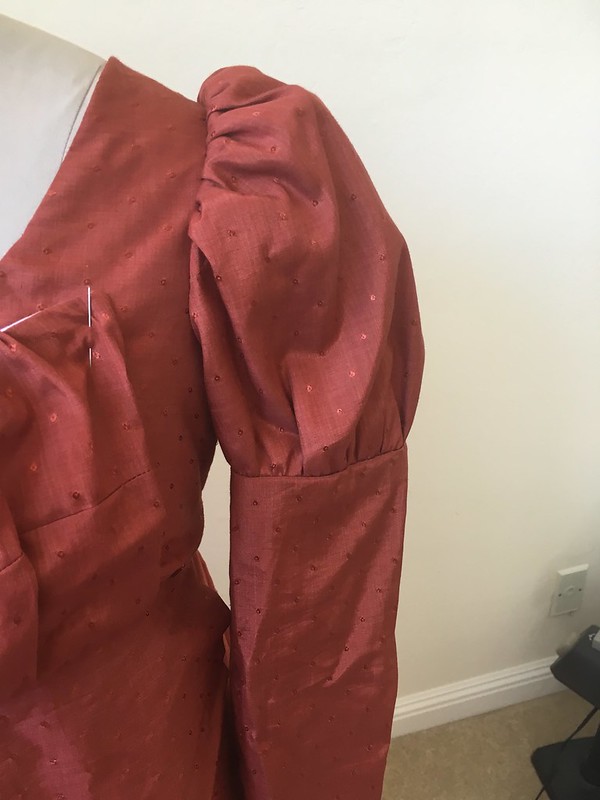 Sleeve closeup. If I had realized how little fabric I had, I probably would have done a plain sleeve instead of this gathered two piece.

Since I finished this in plenty of time the night before, I also banged together a super quick reticule to carry my stuff from some leftover peach taffeta and gold lace (because everything is better with gold lace). 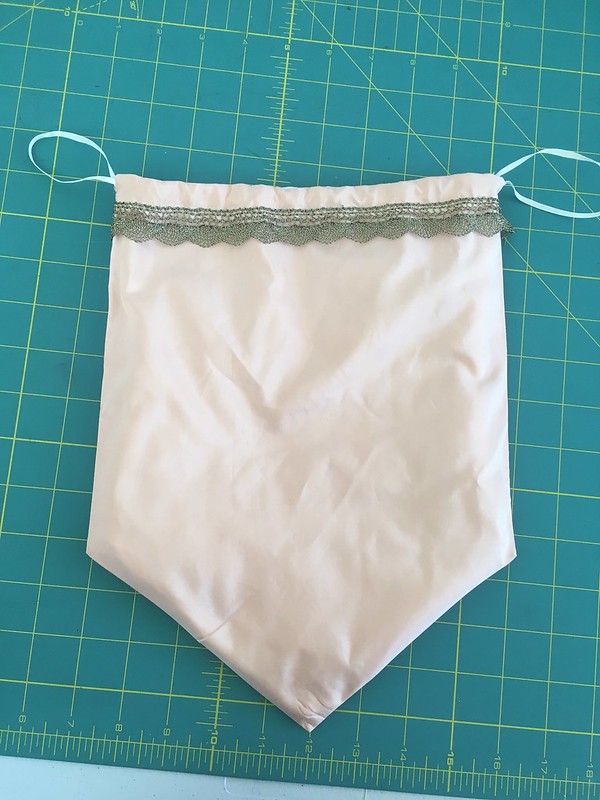 For the event, I popped on a pearl necklace, pearl earrings from Dames A La Mode, and a pashmina on my head for a turban. (Seriously, regency is super easy to hack together.) Over it I wore an amazing empire-waist vintage velvet coat I bought from Moon Zooom (a vintage thrift store) years ago. It definitely read as a fancy pelisse, and I really needed it because it was super cold that day. The boots are Robert Land, which I bought when he was heavily discounting shoes in his going-out-of-business sale. 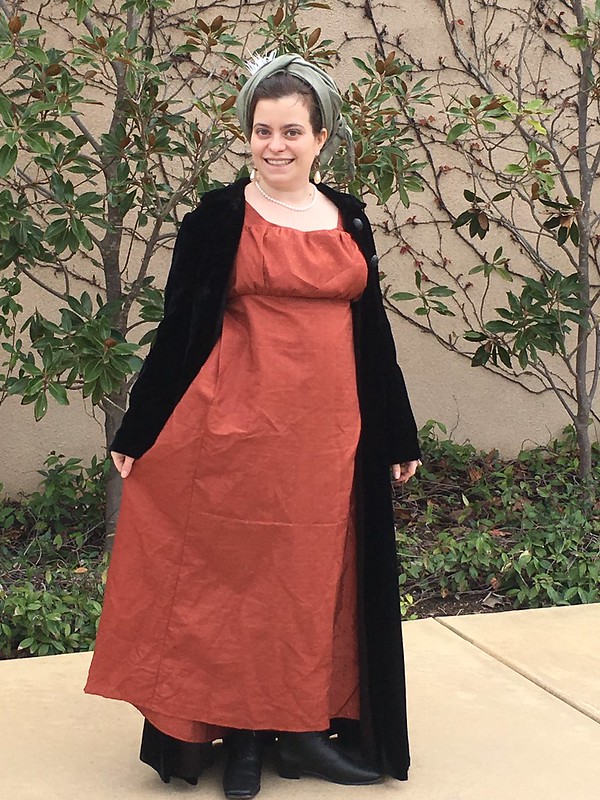 Sorry, no front pictures without the coat. It was *really* cold outside. 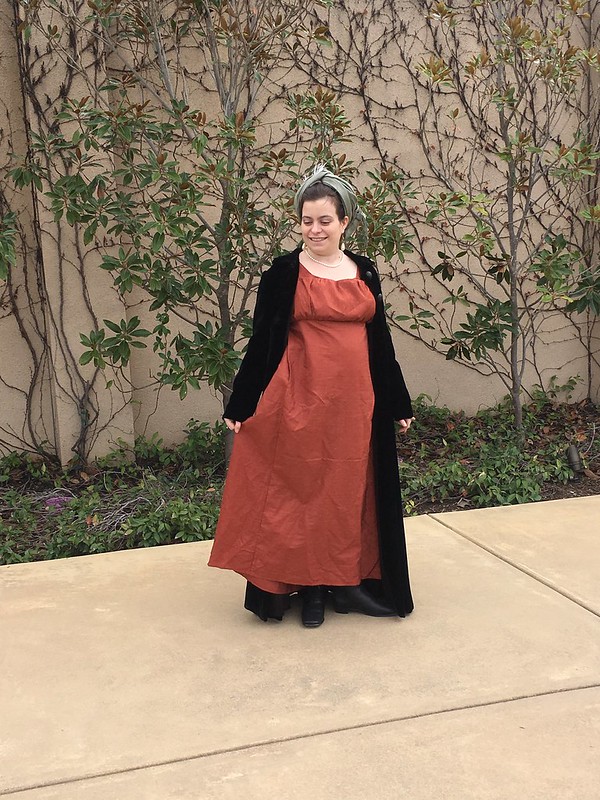 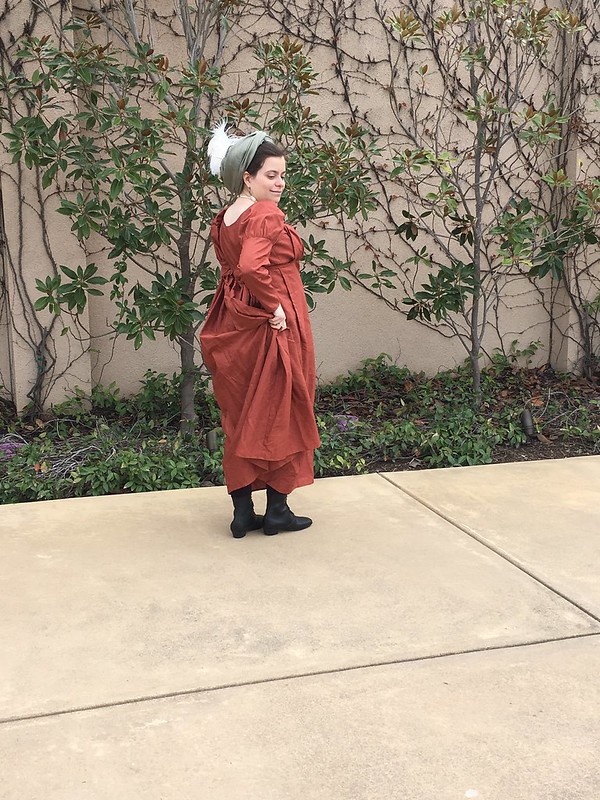 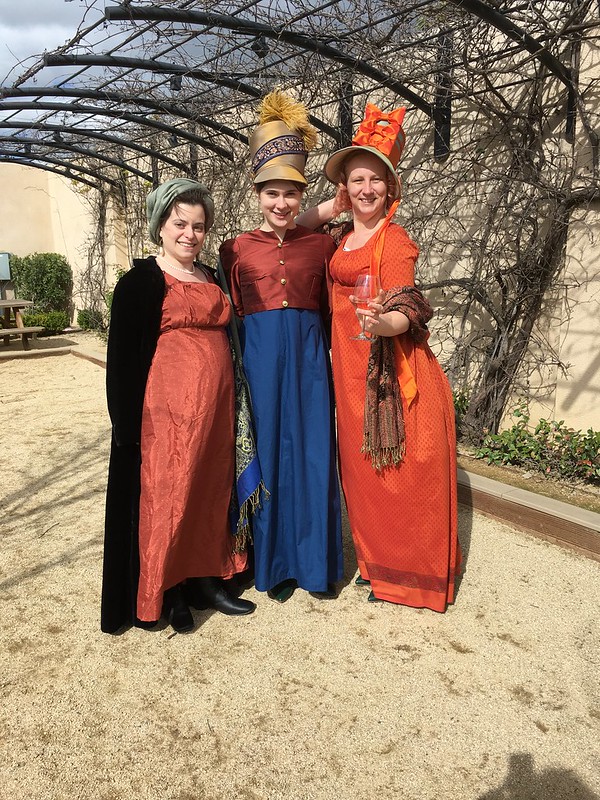 All the orange ladies!

Overall, this is a little more costume-y than historical. While all the elements are historical individually, not so much when you put them together. Puffy sleeves and shorter hems are seen together in the late regency period, but I don’t think they actually coexisted with bib-front gowns, which are seen earlier. But whatever, now I have a pretty dress to frolic around in for regency events!

This entry was posted in Orange regency dress, Regency. Bookmark the permalink.