Redonkulous Sleeves, plus Hilarious Notes from the Workwoman’s Guide

Last up, I made a bodice!

Next, I needed to figure out how to do ridiculous late 1830s sleeves. By this point, the fullness had collapsed at the top of the arm, leaving you with all the fullness from the elbow down. Kindof like a bishop sleeve on steroids.

I chose to make my sleeves as two pieces; an upper and a lower sleeve. You could do them as one piece and pleat the top down to fit snugly, but pleats don’t show up very well on a narrow stripe fabric so I didn’t think it would be worth it. Also, I want to be able to use this dress as an evening gown, which I can do by removing the lower sleeves and just leaving the upper part.

For the upper sleeve, I grabbed the sleeve pattern from Truly Victorian 440 (which I have never actually used). I figured this would fit the off-the-shoulder bodice armscye well enough. I didn’t use the whole sleeve, only the top part which would be above the elbow. 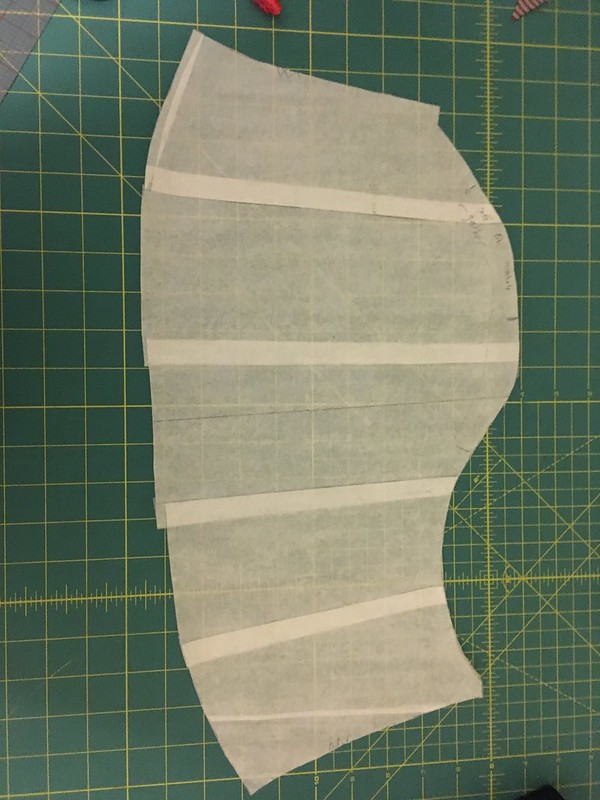 Then I mocked it up and put it on. Of course, this sleeve was way too big around, when I wanted something close fitting around the arm. Sheesh, looking back at the pattern it was super obvious this would be wide. You’d think it was the first time I’d ever seen a sleeve pattern before… I ended up taking out about 6 inches of width from the bottom.

For the lower sleeve, I first tried scaling something up from The Workwoman’s Guide (see below) but I didn’t like the shape. So I went to the old standby Janet Arnold. I started with one of the giant 1830s sleeve patterns, but left off the top part so as to approximate a sleeve starting at elbow length. 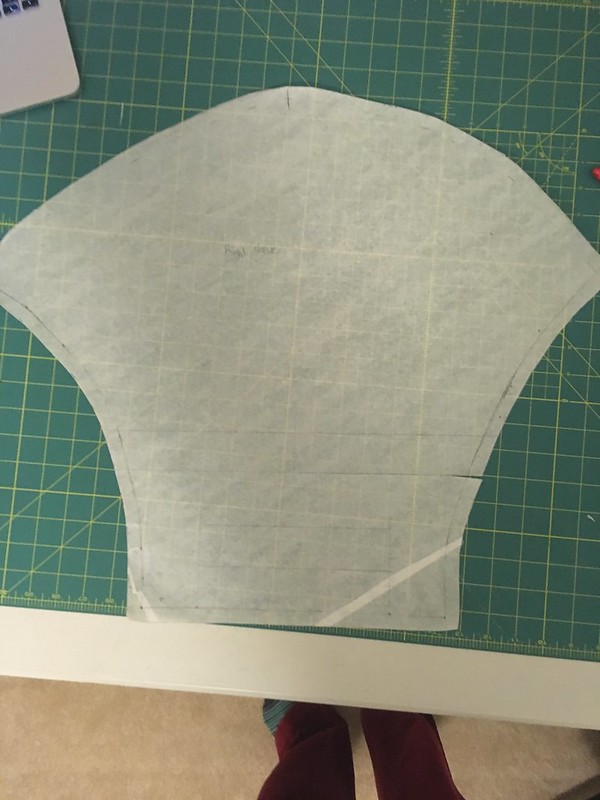 Yes, this is a sleeve pattern.

I made a mockup, and pinned it onto the upper sleeve with some fabric scraps to see if I liked the double-ruffle look I had planned. 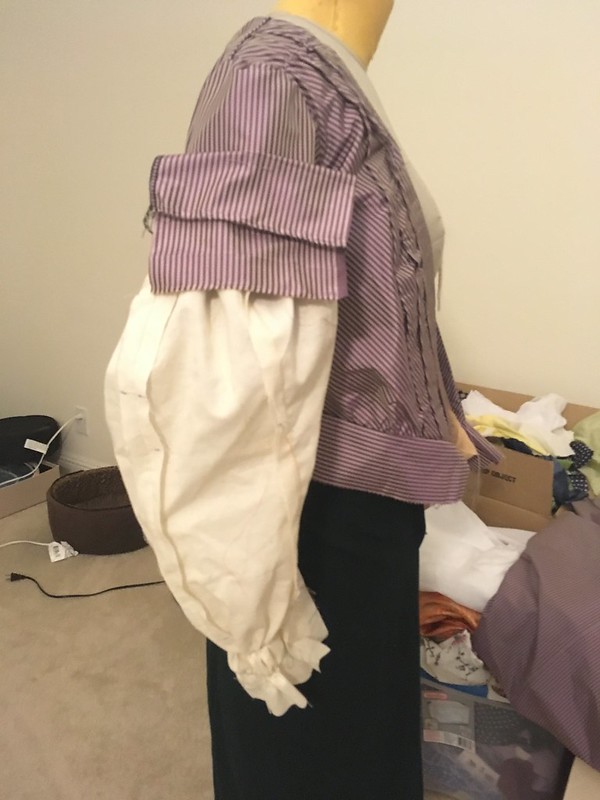 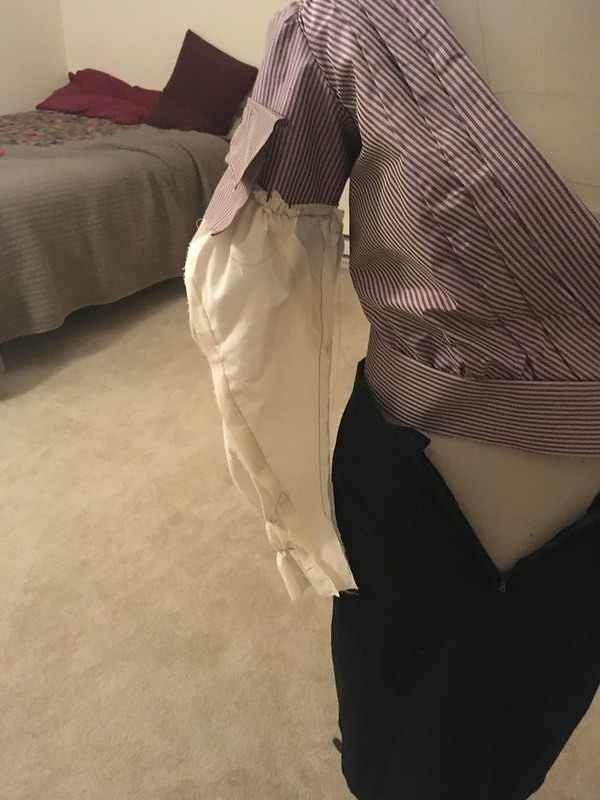 Looking good! I cut the sleeves out of fabric and lining fabric. I interlined the top opening with a strip of crinoline to keep them nice and poofy. This is accurate for 1890s sleeves, but not so much for 1830s. I think they only used separate puffs at this point to keep sleeves large, as none of the examples in Costume In Detail describe a stiff interlining. 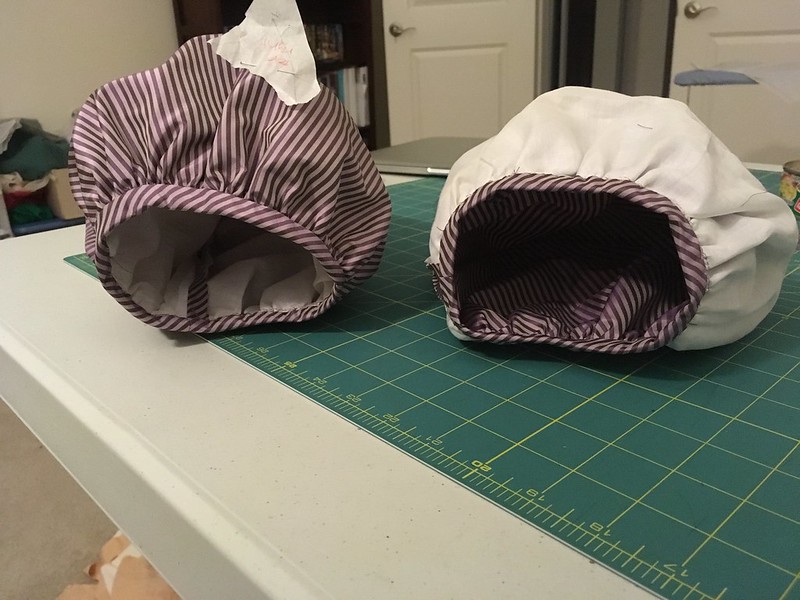 I kept a note pinned to the right sleeve the whole time so I would know which was which until it was finally sewed on. 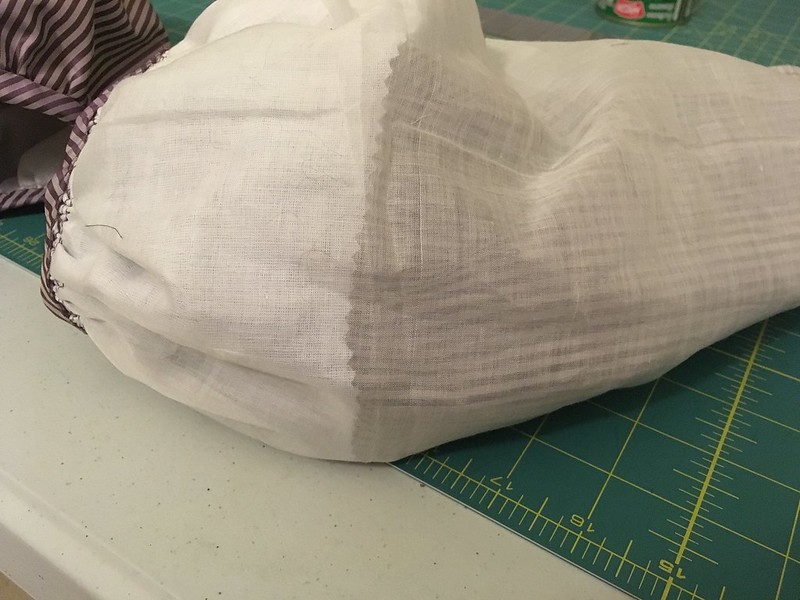 With a bias binding at the top and a cuff at the bottom, sleeves are finally done!

And now for a detour –

The Workwoman’s Guide is a book from 1840 aimed at middling class women on various domestic arts, with lots of emphasis on sewing and clothing construction. You can download it for free on Google Books.

Among other things, it also has advice on packing, drying clothes, folding clothes, mourning clothes, etc. I figured something for lower/middling women of 1840 would be perfectly valid for upper class women of the late 1830s. It had some useful notes, plus some hilarious notes which I’m including down below.

“It is a good plan to line silk and merino, or stuff gown bodies, with strong linen or brown Holland as it keeps them in shape, by preventing them from stretching.” ( pg 106)

“Checks are becoming to tall people, and stripes to short ones, as the former rather diminish, while the latter give an appearance of greater length to the figure than is natural to it, in the same way that a striped paper makes a room look higher, than one which is checked, or of which the pattern goes round instead of from top to bottom.” (pg 106)

“A widow’s cap is a very difficult thing to make well, and looks particularly slovenly when ill put together.”

“Bustles are worn by those whose shape requires something to set off the shape of the gown. They should not be too large, or they look indelicate, or in bad taste.”

Next up, frantically working to get the dress into a wearable (if not finished) state before Dickens.

This entry was posted in 1830s, Ada Lovelace dress, Uncategorized. Bookmark the permalink.

1 Response to Redonkulous Sleeves, plus Hilarious Notes from the Workwoman’s Guide