Because I’m frugal, I didn’t want to spend $30 for a Larkin & Smith pattern, so I figured I would scale up Janet Arnold and hope for the best. I used one of the Snowshill gown patterns, and cut it with 1″ seam allowance so I would have some wiggle room, since the pattern measurements weren’t wildly far off from mine.

Of course, despite hoping that this would be one of those times that a pattern magically fit perfectly the first try, lol of course it didn’t.

No pictures available of v1, but the most major change I had to make was moving where the strap started in the front, since it was practically under my arm instead of in front of it. 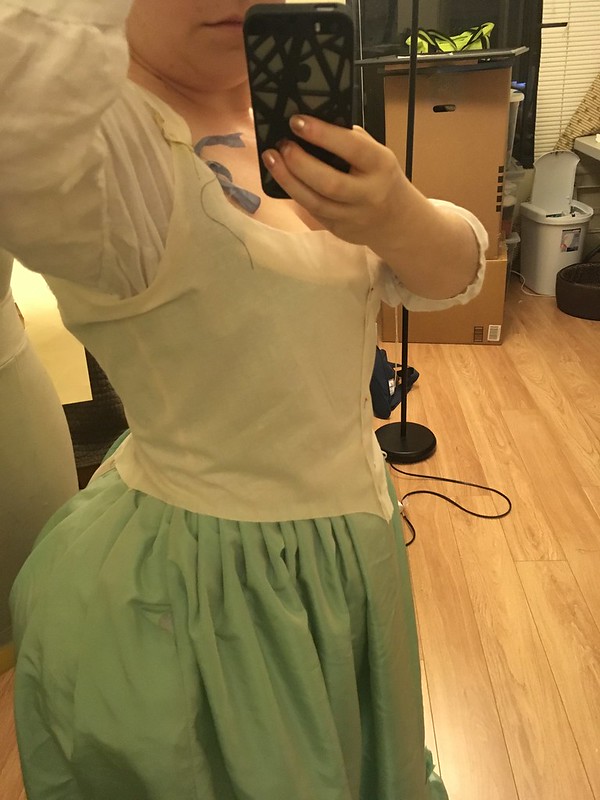 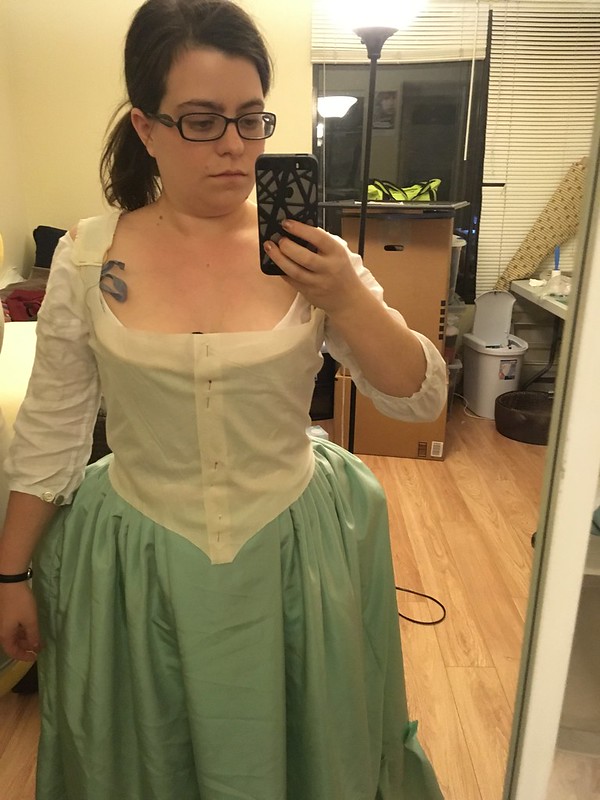 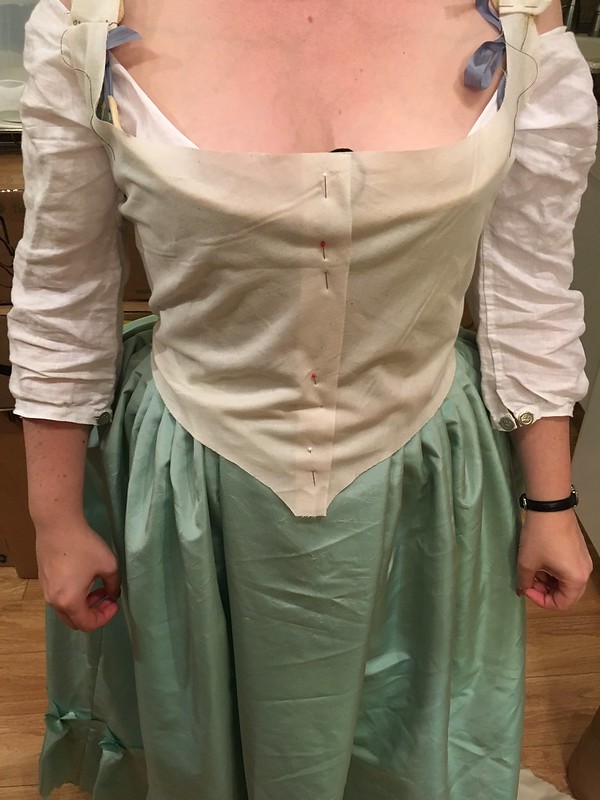 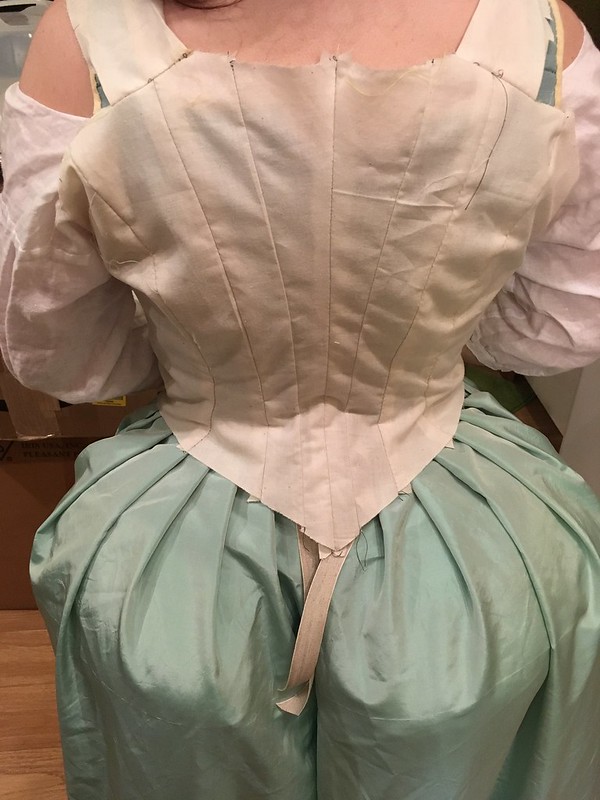 What is that nonsense under the arms 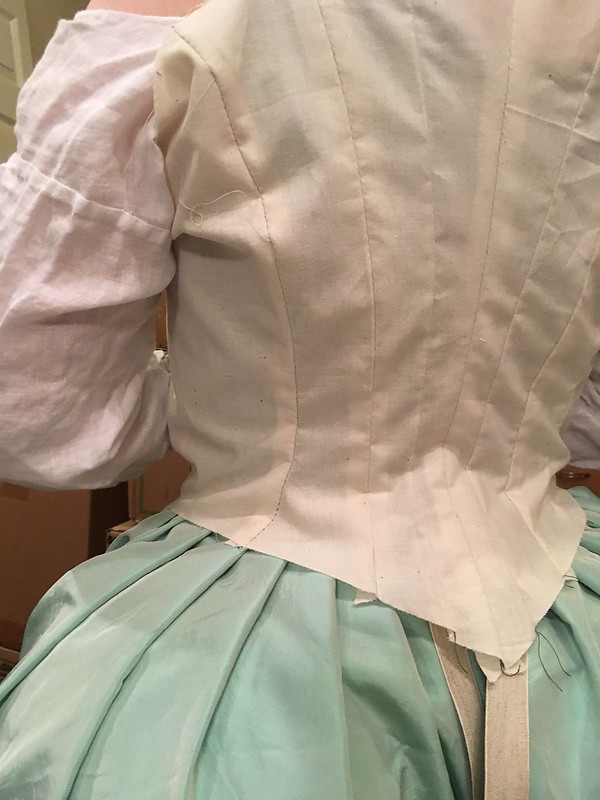 Checking in with the 18th Century Sewing facebook group, the general advice was that the waist was too long (which was causing those wrinkles), and something funky happening at the underarm as well. They also pointed out the back pieces looked too big, and I should take a bit of width out of them. The center back seam did have a lovely shape though, and I was able to see the deep V I was looking for.

So, made more changes and on to mockup 3. I have no actual photos of this one either. I ended up cutting too high up the hip, and planned to put some of that back. The biggest issue was that there was some looseness around my shoulder blades on the back, which of course is the least reachable part of the body to fix yourself.

Friends to the rescue! My friend and coworker Bunny has made oodles of 18th century dresses before, so I met up with her to do the final fitting. She pinned in the bodice here and there, and I was able to land on the 4th and final mock! 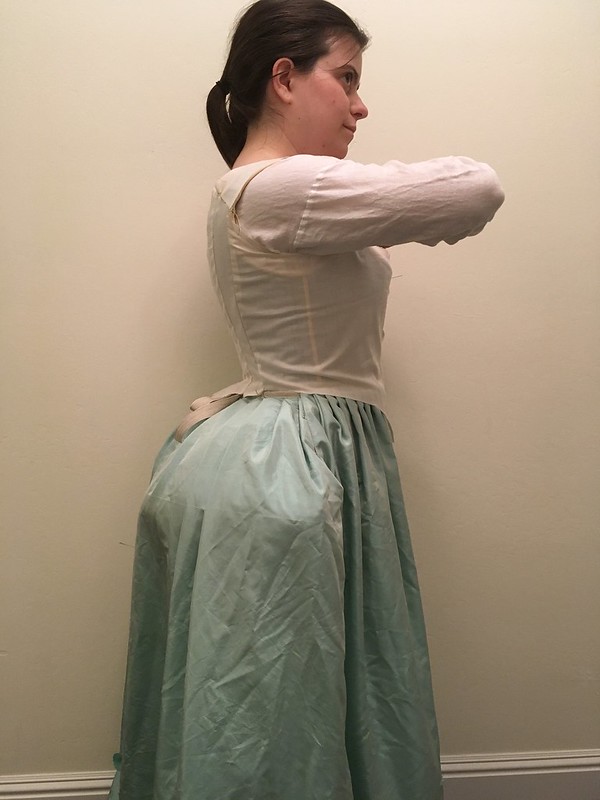 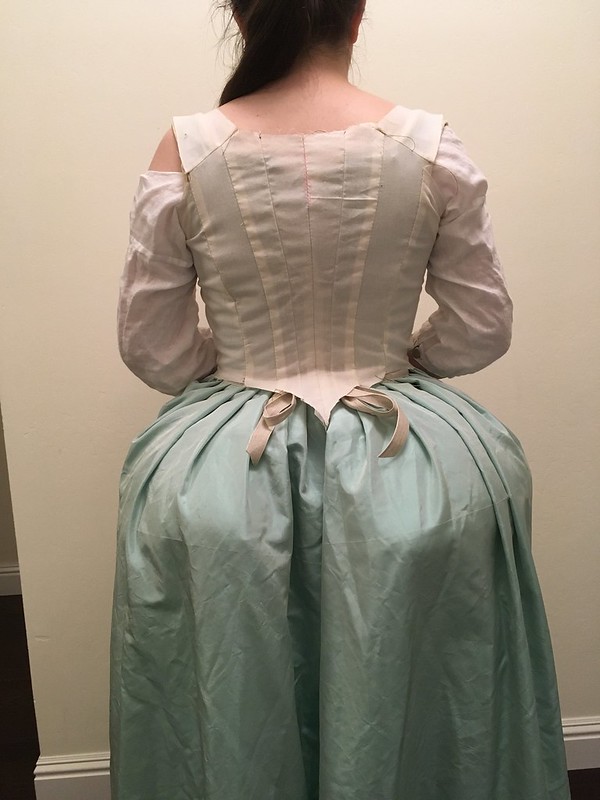 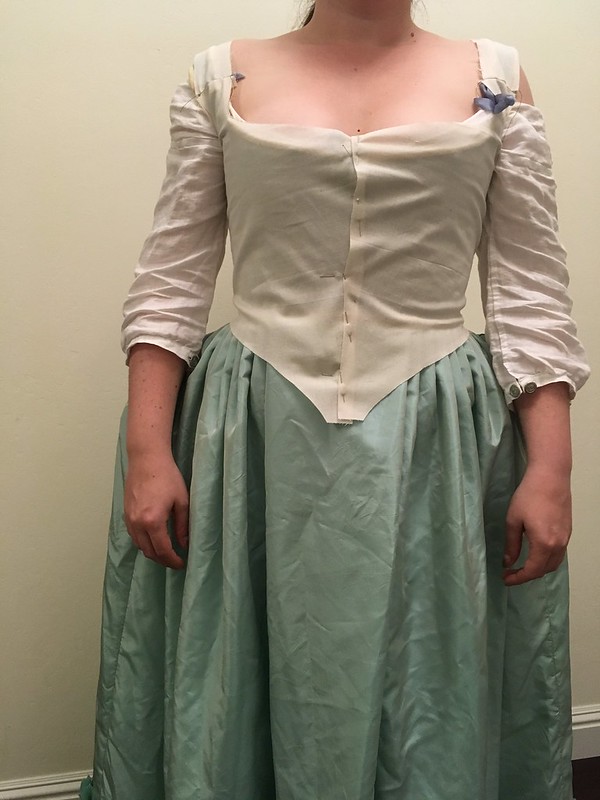 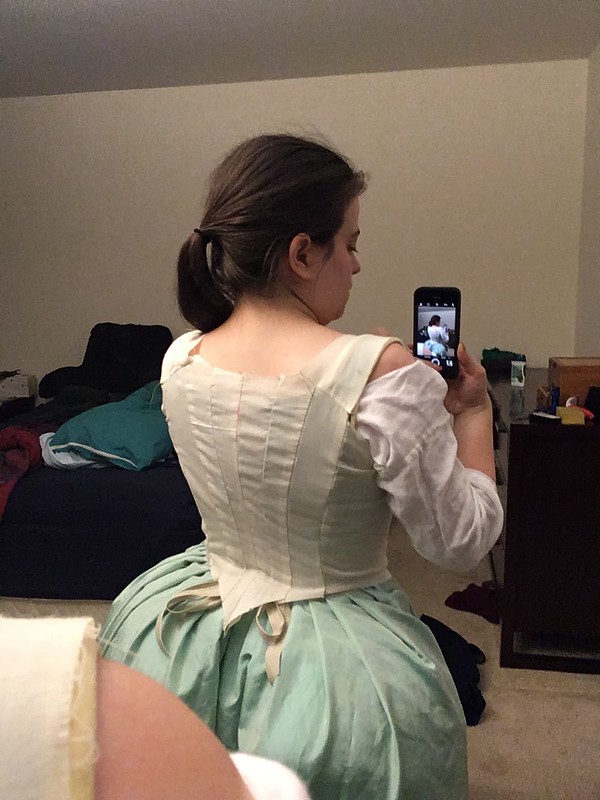 Finally time to start cutting the real thing. I used some leftover linen for the lining. I really wanted to handsew the whole thing, but at this point I was running out of time until the Hamilton ball, so parts that wouldn’t show needed to be by machine.

Here is the back lining pieces. They were sewn together at center back, and the seam allowance was sewn down to form a casing for the boning. (If you look at Janet Arnold, it looks like these Italian gowns all had some amount of boning in the back to keep the deep V shape from flipping up.) 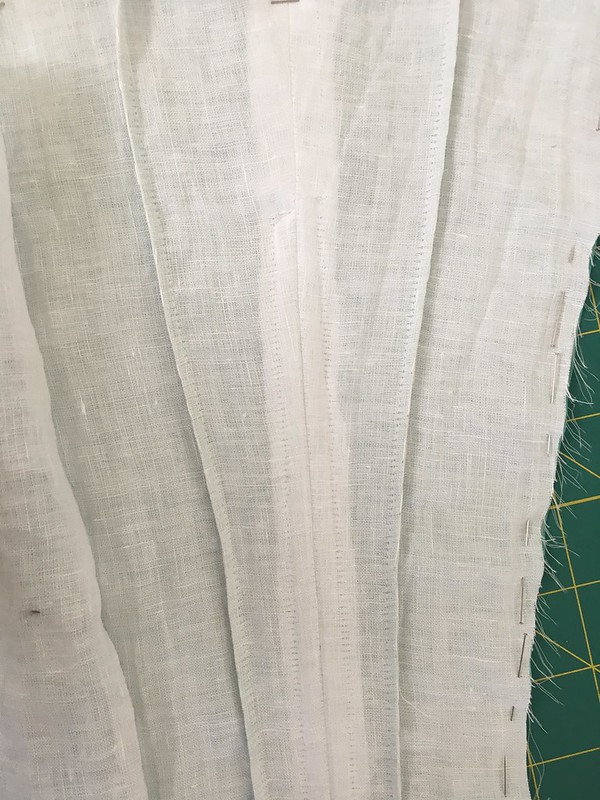 The seam next to center back is a fake seam – it’s just a little tuck in the fabric to look like an extra seam, but isn’t actually a separate piece. I ended up needing to unpick this seam the first time, because I forgot that I wanted the tuck to go through silk and lining fabric the first time…

The silk is on the other side of the back lining. Here I’ve placed the next piece of the lining on where it will be sewn: 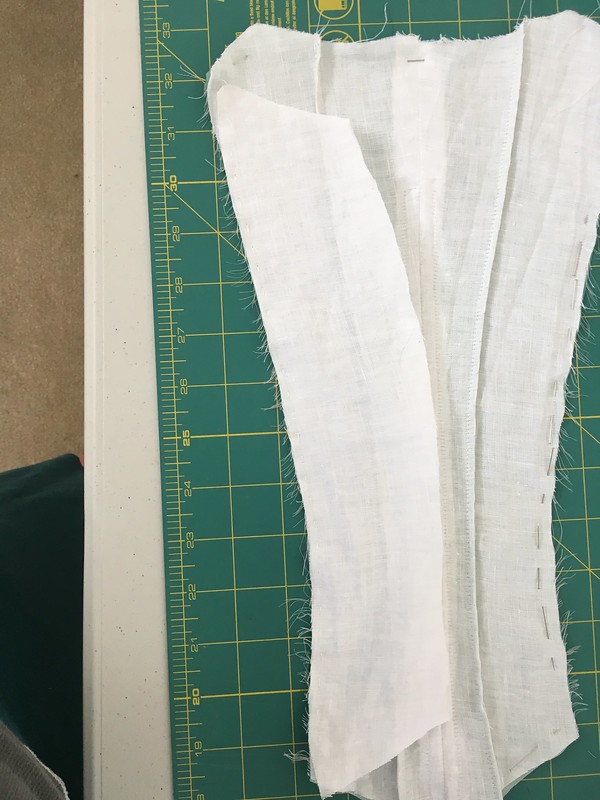 This is what it looks like from the right side: 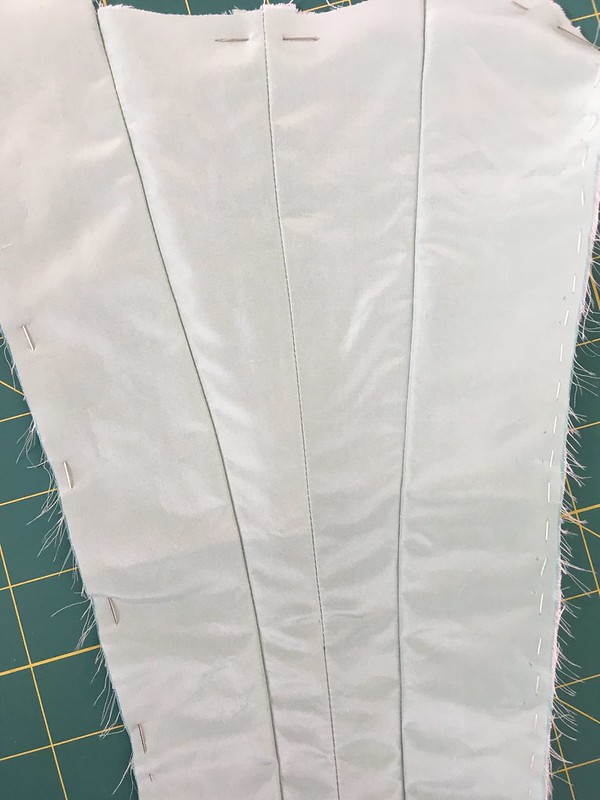 The basting on the right is to hold the silk and linen together before the next piece is sewn on. Since it’s a curved seam, it might wiggle. 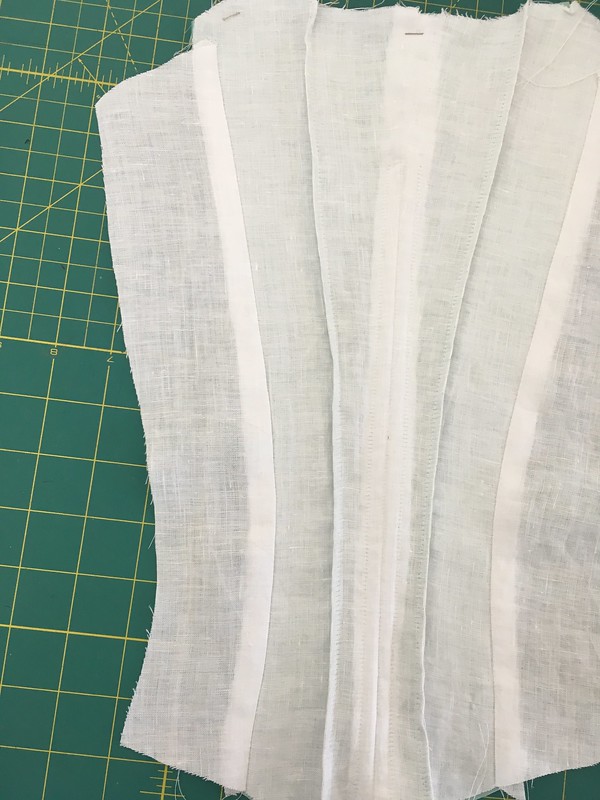 And from the right side: 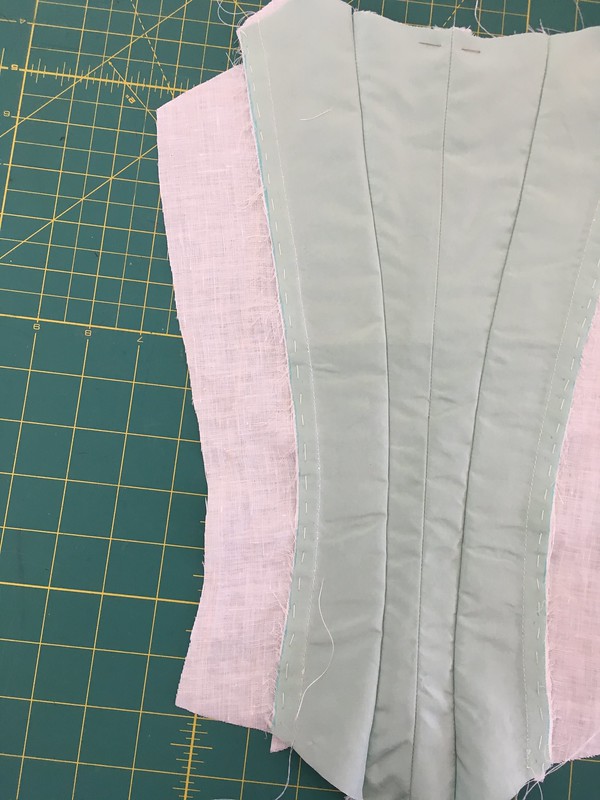 Then the side piece of silk would have the seam allowance pressed under, be placed on top of the side lining, and topstitched on.

Repeat for the other pieces until bodice is complete!

(Since this dress was made, I took an 18th century dressmaking class from Janea Whitacre, the head mantua maker at Colonial Williamsburg, and learned just how off my techniques are. They aren’t totally wrong, but everything would have been draped on the body and not made from a pattern, and that makes a difference.)