This costume will be totally unrecognizable for anyone who hasn’t read Wheel of Time by Robert Jordan. And even then you need to make the commitment of getting 8 books in before you see the character dressed in her particular way.

As you may have heard on this blog before, I go to Jordan Con every year. Being me, I also enter the costume contest. (The first year I went I didn’t enter, and it was painful sitting in the audience looking at most of the costumes and thinking “I could do better”. Hey, I’ve never claimed to be modest about my sewing).

So here is a description of the character Sevanna from Winter’s Heart:

“The wide, dark skirt looked like the Aiel women’s at a glance, but it was divided for riding and appeared to be silk, as was her creamy blouse, and the hem revealed red boots in her stirrups. The wide folded kerchief that held back her long golden hair was brocaded red silk, and a thumb-thinck circlet of gold and firedrops nestled over it. In contrast to the Wise Ones’ worked gold and carved ivory, her ropes of fat pearls and necklaces of emeralds and sapphires and rubies half hid nearly as much bosom as SOmeryn had on display. The bracelets climbing almost to her elbows differed from those worn by the two Wise Ones in the same way, and Aiel did not wear rings, but gems sparkled on every finger. Instead of a dark shawl, a bright crimson cloak, bordered with golden embroidery and lined with white fur, flared around her in the stiff breeze.“

This is not something that would be a winning costume (and I didn’t place at all) but I totally expected that! This costume falls squarely under the “I don’t care if it’s historically accurate, I just want my tits out” form of costuming (with my deepest appreciation to Frock Flicks for coining the phrase)!

I figured this would take me like 2 weeks to make, but somehow it stretched out to be more like 3 months. Since this was somehow taking forever, I have zero construction pictures. But they wouldn’t be very exciting anyways.

The blouse is a big drapey thing that pulls over the head and laces up the front. It has one piece for the front and 1 piece for the back. I wanted it to be nearly sheer, so I made the pesky thing out of silk georgette (one of my oldest stash items) which was drapey and wiggly and annoying to sew. I interlined the neckline facing and cuffs with silk organza to make them less wiggly, but had to sew both of those by hand to get something that wouldn’t be terribly uneven.

The skirt is made exactly like an 18th century petticoat. The fabric was surprisingly difficult to find. I wanted a brown brocade silk or fake-silk, preferably with gold. But I didn’t want any Asian floral inspired patterns since that didn’t seem to fit the medieval-ish world of the book, and that seemed to be all I could find. Finally I found a gold and brown square-print brocade from an Indian etsy seller and decided to chance it. It actually was perfect! I was suspicious about it being pure silk, but it feels like it is (I did not do a burn test to confirm). I’d love to get more of this stuff and do an early 18th or late 18th century mantua one of these days…

Then I went to ebay and lightinthebox to buy as much tacky blinged out costume jewelry as I could find. Add on my blonde wig from my Elsa costume, and you get the closest thing to trailer trash as the Wheel of Time has! 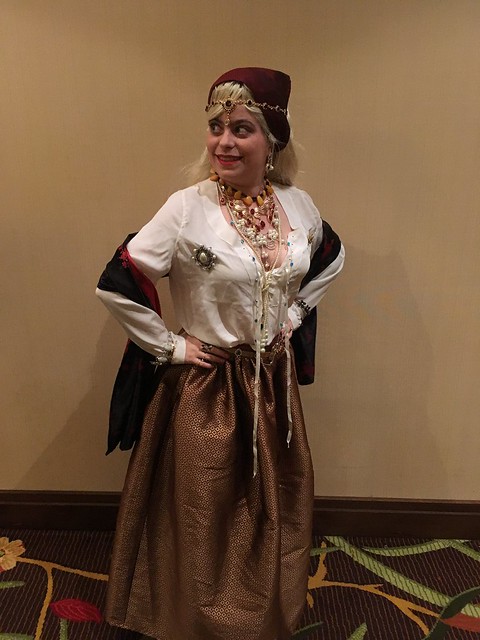 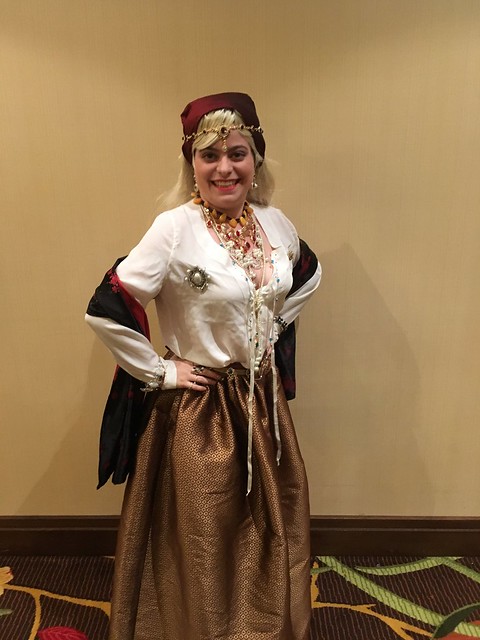 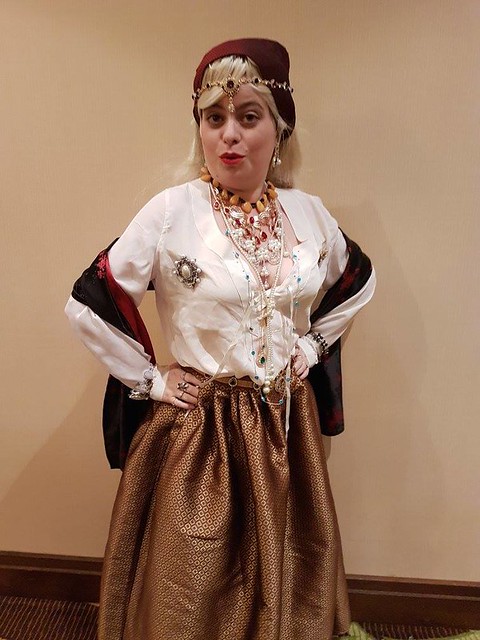 You know Sevanna would totally do duckface.

This entry was posted in Fantasy/Scifi/Cosplay, Sevanna. Bookmark the permalink.