(I looked up quotes about hats to find an interesting post title and totally failed. Let me know if you think of one).

So during March I took a short millinery class at the local community college and made some hats!

First up is this fascinator. I call it the “12 minute fascinator” because, well, I literally made it in the last 12 minutes of class. 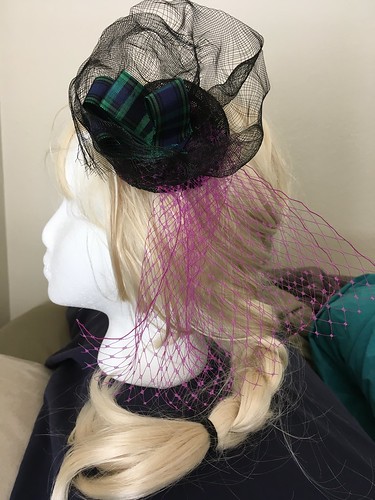 Modelled by my elsa wig

The teacher had all sorts of widths and colors of horsehair braid which is super fun to play with. Stretching it out and messing with it gives you the awesome seen above. This fascinator really needs some kind of button or buckle or flower cluster in the center to cover up the ends of the ribbon. It’s not historical at all, but is fun for playing pretty princess dressup!

Next up is the hat I decorated. The class was unfortunately not long enough for us to learn to block our own hats. The teacher gave us a choice of styles, and pre-blocked a hat for each of us before class. I went with this wide brimmed cloche, which was fashionable in the late 1910s and early 1920s. 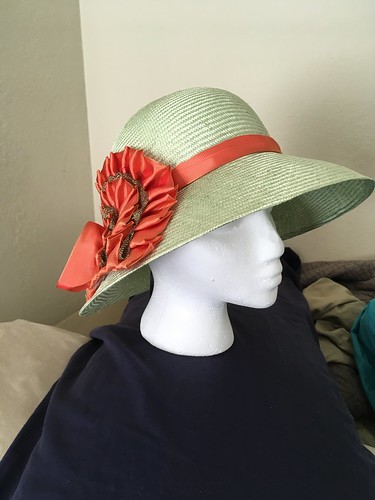 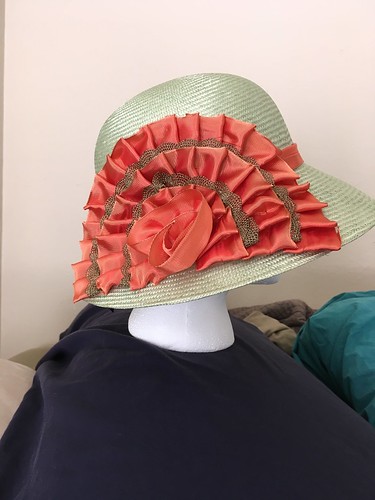 I wasn’t sure how I was going to decorate it at first. I wanted to do something with the gorgeous orange wired ribbon, so I played around with making rosettes, but it looked very meh. Eventually I turned to pinterest and found this 1920s cloche from the Metropolitan Museum of Art, and copied the cockade on it (the dangly ribbon however looks silly on a brim this wide and I left it off).

I pleated the ribbon (since it was wired, it was super easy) into shape and tacked it on to wide horsehair braid, which was in turn tacked onto the hat. At the last minute I added the gold lace because BLING.

Last up, and the most work, is this Edwardian boater hat. There were quite a few steps to making this, from cutting the buckram, attaching the millinery wire, basting fabric the brim and crown and , sewing on the bias tape with invisible handsewn stitches, etc. I used  leftover scrap fabric from my Melisandre dress to cover it. 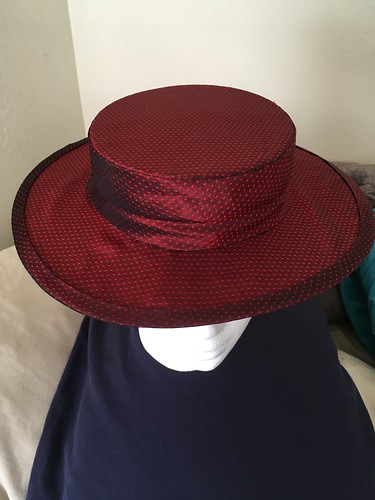 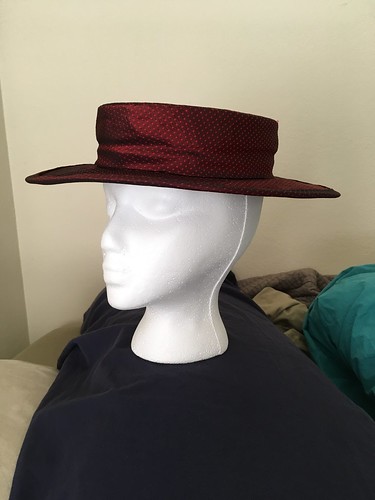 All of this took me about 13 of the 16 class hours, leaving no time to trim it. I want to goth it out and black ribbon and bows and feathers.

Conveniently, these hats also fit into the March Historical Sew Monthly Challenge! Which is awesome, because I was too busy working on a cosplay outfit for Jordan Con to make anything else. This puts me at a record breaking 3 challenges in a row! Let’s see how long I can keep it up this year…

The Challenge: The Great Outdoors. For most of history, no outfit outside the home was complete without a hat.

How historically accurate is it? Very? The cloche was blocked for me from a hat blank, and this trim was based on extant examples. As for the boater, hatmaking techniques haven’t changed all that much.

Hours to complete:  16 hours of class!

First worn: I’ve only worn the fascinator to a friend’s party!

Total cost: The price + materials cost of the class was around $150.

Now I just need outfits to wear with all of these…

This entry was posted in Hats. Bookmark the permalink.