Since in this modern world, you can pry my cell phone out of my cold dead hands, I figured I needed a pocket to wear with the upcoming 18th century dress (which I still haven’t told you about) so I have a place to put said phone.

While fancy embroidered pockets were the norm,

I found information at The Young Sewphisticate about patchwork pockets, and decided that was a nice compromise between totally plain, and fancy embroidery.

Since I did not have the inclination to do detailed quilting, I was pleased to find this much simpler example of a patchwork pocket.

So I went into my box of tiny scraps that I always hope will one day prove useful, and pulled out some random bits of linen and cotton.

For the pattern, I drew a rectangle. Then I tapered the ends to make it narrower at the top and rounded all the corners.

I sewed squares of linen into a larger square 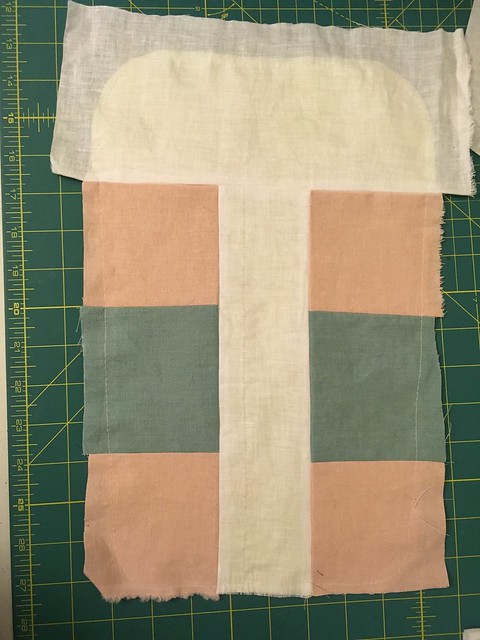 I cut an interlining of yellow cotton (leftover from my 1930s dress) and basted it onto the wrong side of the linen patchwork. This was to cover all the raw seams. You don’t want raw seams when you are going to be frequently putting items into and out of a pocket, as that would be a great way to get fraying seams. 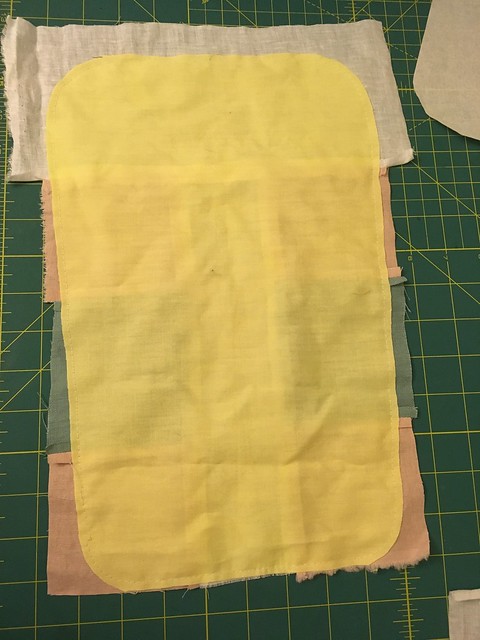 I drew a line for the slit, and machine basted around it at 1/8″ from the slit. This will prevent the layers from shifting when cutting the slit.

I covered the slit with a bit of silk taffeta bias tape that was leftover from an old dress. Silk is so not the right material for this, but I didn’t want to cut new bias tape because see again: laaaazy. Since this was fiddly work, I handsewed this part. 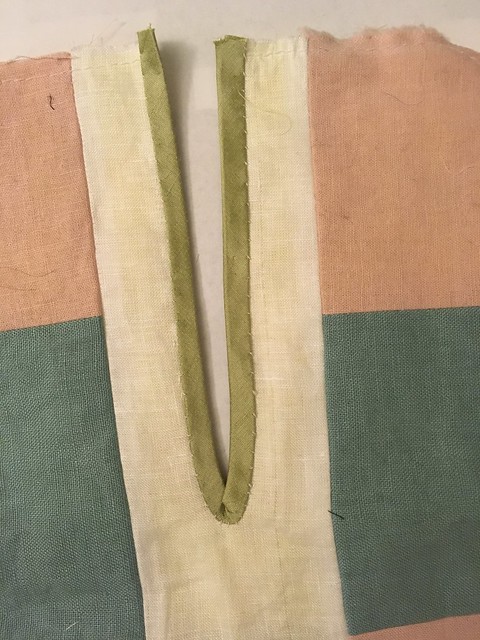 Then I sewed the lining and the patchwork piece wrong sides together around the sides and bottom. I trimmed down the seams, cut into the curves, and flipped it right side out. Then I sewed a running stitch around 1/4″ away from the outside edge, almost like a french seam. Alternately, you could put the pocket and lining wrong sides together and use bias tape around the whole outside. Two out of three examples above didn’t use bias tape, and I thought I could see that little hem around the edge, so I wanted to try that out.

I folded a piece of cotton around the raw top edge, and whipstitched that down on both sides. Voila, a finished pocket! 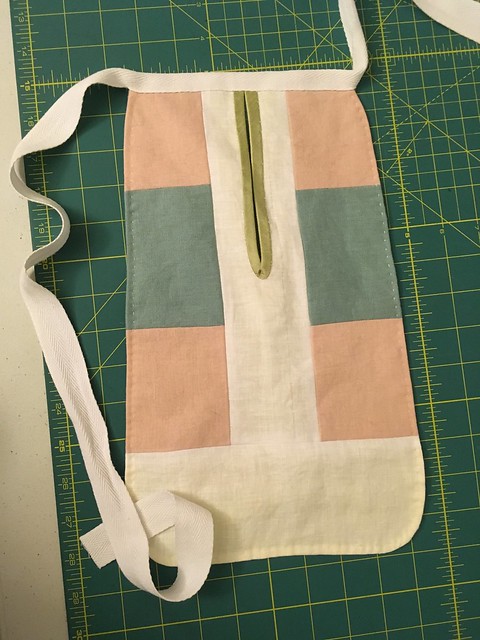 I also tried it on with the whole 18th century undergarment set! 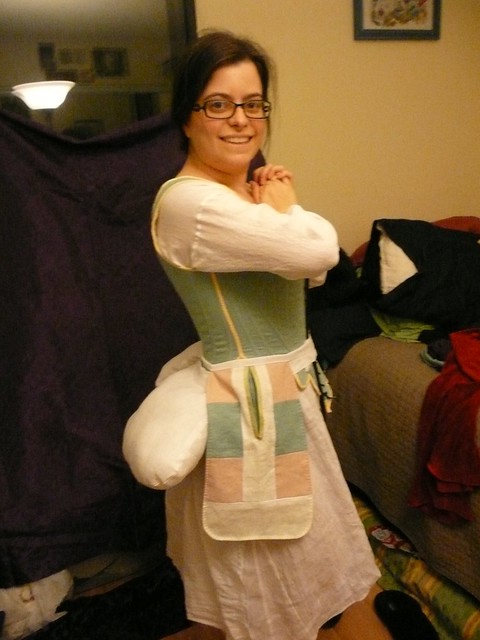 Should pocket go over or under the bumroll? 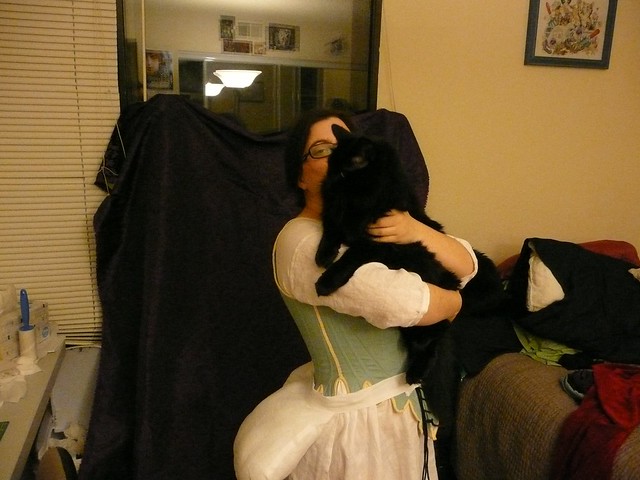 This cat does not like being picked up, but she also doesn’t have opposable thumbs, so I won this round. 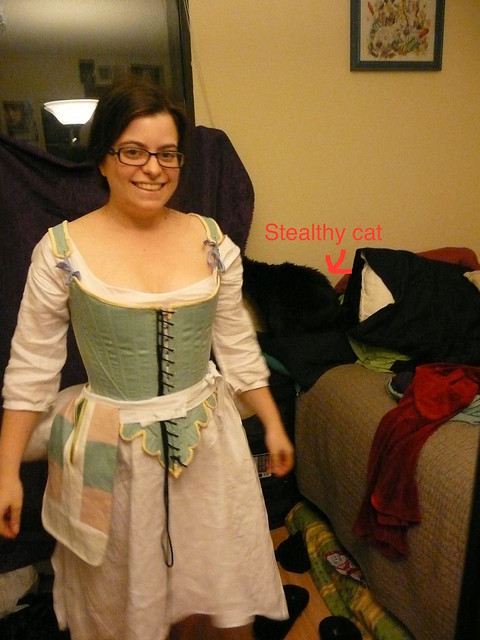 The other cat was more interested in gnawing on the string for the blinds.

Now, the historical accuracy of this pocket is questionable at best.

We have examples of patchwork pockets, and even one exceedingly simple one, but I’m not sure about the cotton and linen mix I’ve got going on. The silk bias tape is definitely a no-go. You’ll also note the example pockets date to the 19th century, not 18th. Patchwork seems plausible for the 18th century, but I can’t document it.

The biggest issue is that I plan to wear this pocket with a fancy 18th century dress. The fanciness of the 1780 dress would definitely warrant an embroidered pocket, and not such a plain one.

Regardless, I’m pleased with how this turned out, and it was a pretty quick project. And attempting to keep up the momentum of the Historical Sew Monthly, I’m entering this for February!

What the item is: A linen patchwork pocket.

The Challenge: Re-make, re-use, refashion. I’m stretching the definition a bit – the white linen here are scraps from when I was cutting down the sleeves from a shift I was working on. It had ended up more 1750s and I wanted 1780s. Cutting down shift sleeves is a plausible re-make, so I’m going with it. The other linen squares are from my remnant box, so there was nothing new used here, which feels in the spirit of the challenge.

Pattern: No pattern, just drew it out.

Year: As described above, while I plan on using this for 18th century, patchwork pockets are really more of a 19th century thing…

How historically accurate is it? Iffy, as described above

Hours to complete: 4 or so, this was a super fast project. It’s only this long because I did a bit of handsewing on the bias tape and around the edges.

First worn: Only for photos

Total cost: Everything here was tiny scraps, so I’m counting it as free.

All my new 18th century undergarments are done! Now I can get started on the dress, which I shall finally tell you about in the next post!

This entry was posted in 1700s, Undergarments. Bookmark the permalink.

2 Responses to A (mumblecentury) pocket