Hello blog that I have not posted on since Halloween!

With my usual last minute sewathon, I finished my Melisandre dress for Halloween (literally, I started sewing the hem at the time the party was supposed to start). But then the necklace I commissioned broke on its first wearing, and I didn’t want to take photos without it, as the necklace is a key piece. So all I have right now is this badly lit cell phone photo (plus bonus Faith Militant husband, in his tradition of making a complementary costume to mine in 30 minutes. Check out that excellent snuggie action!).

A long swishy wig is tons of fun to wear! The cat enjoyed it too, before I stopped letting her attack it, since I didn’t want her eating tons of plastic hair strands.

After that I had to work on the midterm garment for my Flat Pattern class (which could be a half scale and/or muslin of the final garment).

Narrowing it down to one dress was tricky, but I ended up going with something relatively simple since we had to make the final dress fit one of the dress forms in the class. I did not want to spend a ton of time (or material) on a dress that wouldn’t fit me at the end!

I found this 1930s sun dress on pinterest. It was a great candidate for the class final, since it would involve doing lots of the things we learned in class such as the yoke, moving the darts to the bust, drafting a skirt pleat extension, etc. I did not make the silly visor, although if I had the original pattern I would have tried it out… 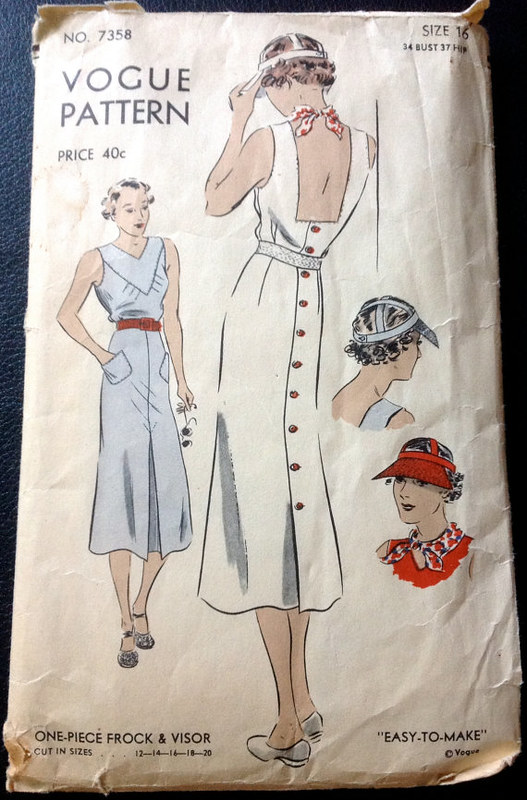 So many interesting things from just a pattern envelope! The price was 40 cents (less than the price of a stamp today). Size 16 had a 34 bust and 37 hip!

The practice half-scale version, next to a sleepy cat for size: 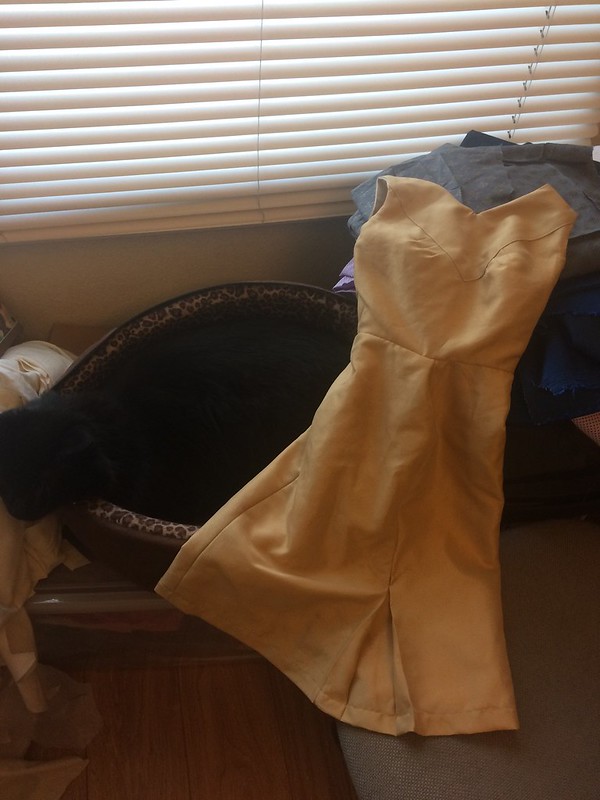 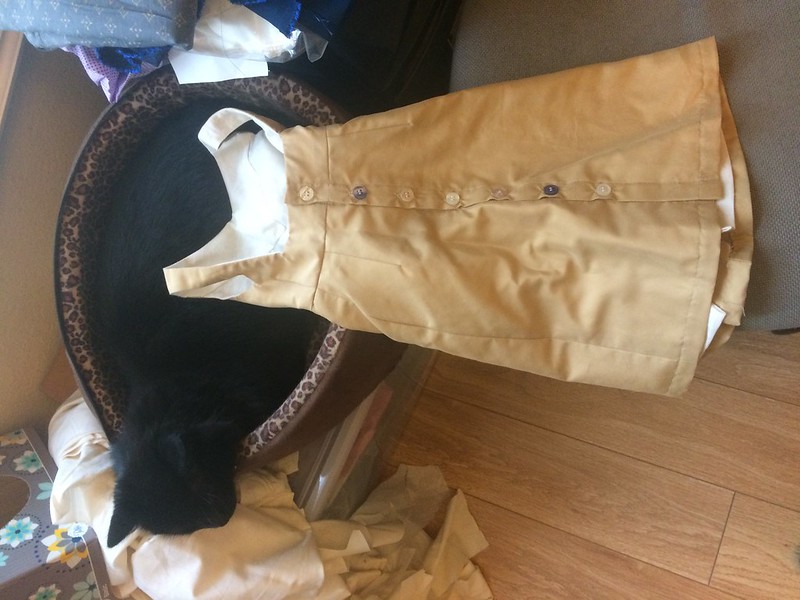 Fun fact, that gold fabric is from some old sheets a friend gave me, and is also the lining of my Melisandre dress.

Then I had 2 weeks to make it full scale, and spent all my time doing that: 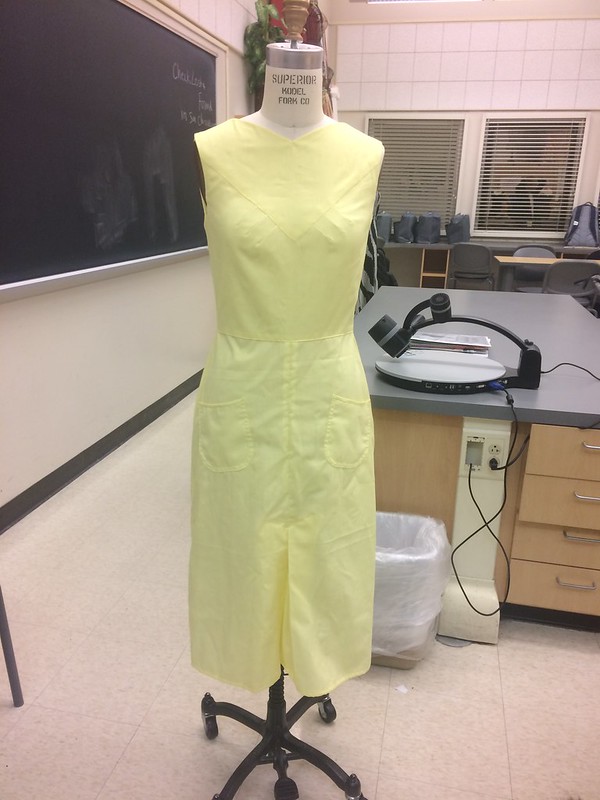 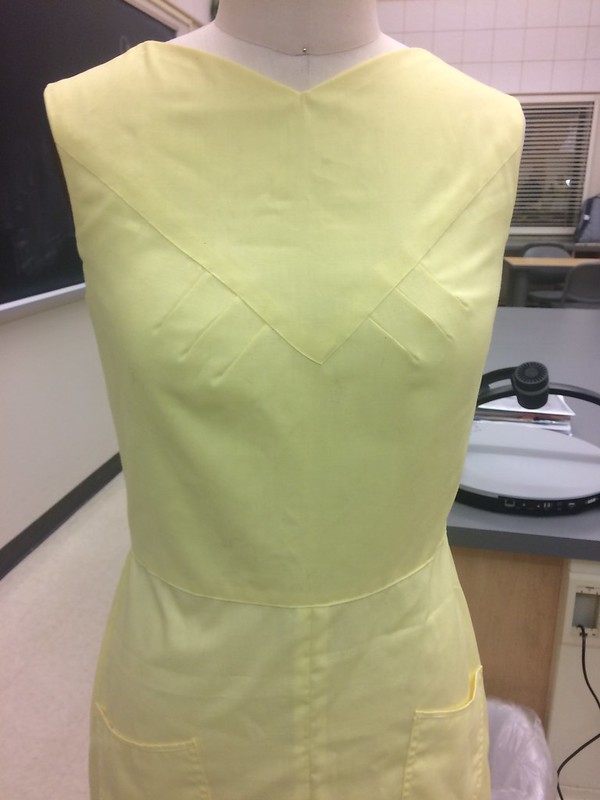 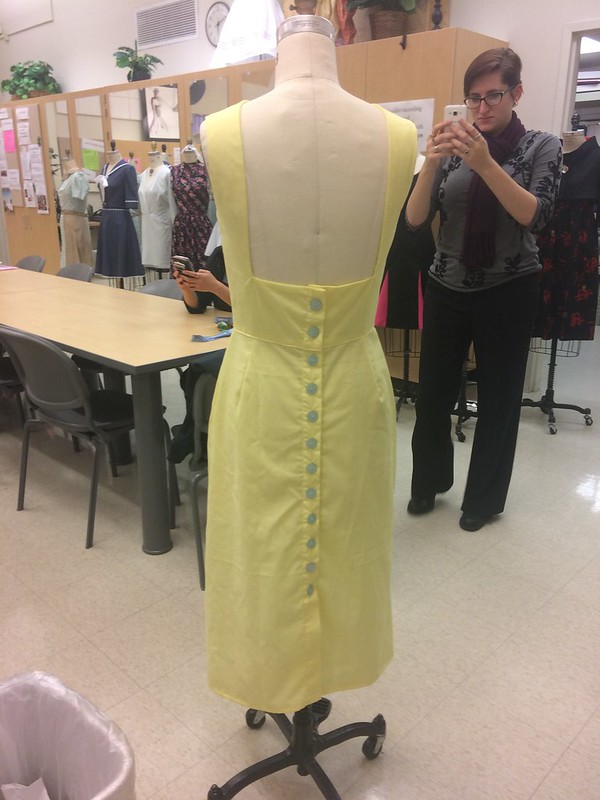 Since I don’t know much about 1930s construction (and I was only working off a pattern picture, not the actual pattern) I reached out to a 1920s/1930s costuming group on Facebook for advice, and here is what I was told:

“Seams were often whipstitched by hand or zigzag stitched on a machine, unless the fabric was not likely to fray, then it would be left raw. Facings were very rare and the most common finish was to machine sew rayon tape to the right side edges, then turn over, press and tack down on the inside with barely visible stitching. Lining was also not all that common, especially on homemade items because people couldn’t afford it. Instead they would wear a slip underneath. ”

I did fully line the top, because I couldn’t think of any other way to deal with the super sharp corners on the back. I did do the skirt as a single layer, with french seams on the sides and bias tape around the pleat bit in order to finish all the seams. It would definitely require a slip, since the skirt is a bit sheer.

It was also my first time doing buttonholes on my Bernina, which can do all of it in one (compared to my last machine, where it was 3 manual parts). It was so pleasant, I want to put buttonholes on all the things now!

I’ll be selling the dress, since I am definitely not the same size as the class dress form. If you have a 25″ waist, 35″ bust, 35″ hips, and are interested let me know!

Now back to sewing for me! I’ve got 18th century on the brain…