For once, making the mockup for this dress was incredibly easy, thanks to the amazing classes I’ve been taking at Cañada College.

I already had a sloper fit to me from a previous class. In the current class I am learning flat patterning, so it was easy to follow the book instructions to change the darts to princess seams, and create a surplice (aka wrap) front. 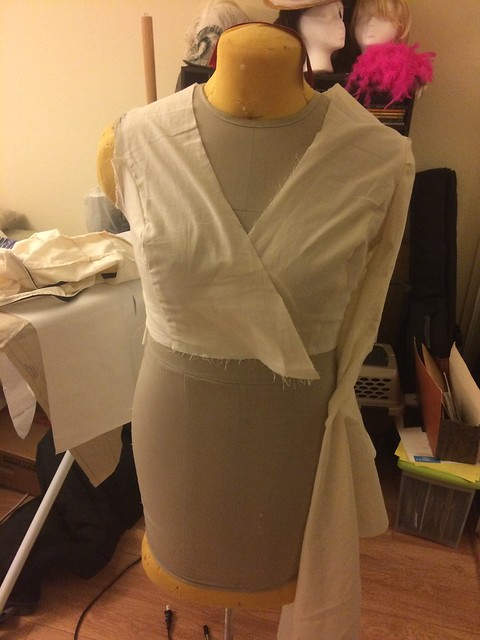 The only changes I needed to make here were taking in the waist a bit (there was too much ease in the sloper) and lowering the neckline.

The sleeves were a little more tricky. I did a bizarre frankenpattern of my sleeve sloper plus the sleeves from Simplicity 4940. I also moved the seam from the underside of the sleeve to the outside, and made the bottom straight across instead of pointed, similar to dresses on the show. 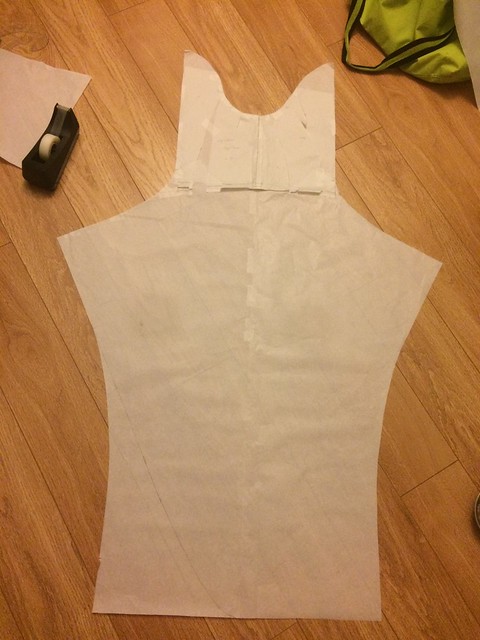 Sleeve pattern, or bunny ghost who wants a hug?

I know, it’s super weird looking. It’s impossible to imagine what that will look like once sewn up.

I mocked it up, and popped it on the bodice. 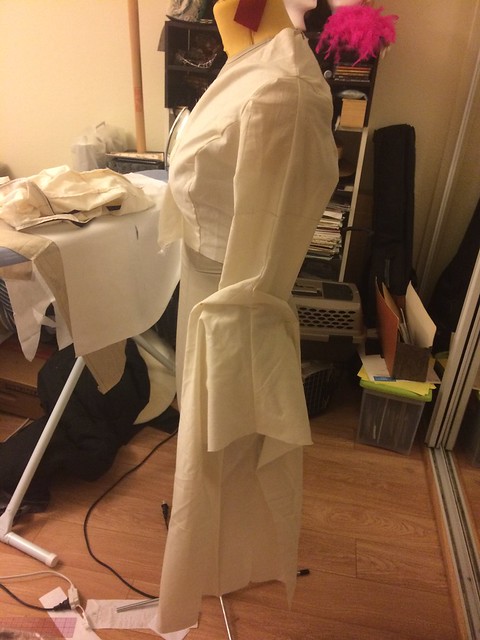 So, I had put the seam going straight down the outside of the arm from the shoulder. This resulted in a sleeve opening which is too far to the side. Like, this looks good if you stand still with your arms down. Turns out that’s not really what humans do. We tend to have our arms forward a lot of the time.

To move the opening, I cut a straight line across the bicep, rotated the bottom so the opening was facing the front of the body, then used a french curve to trace a new seamline joining the ends of that top seam. I realize this makes no sense to describe, but it’s the best I can do. That gave me a flat pattern which looks like a slightly janky version of the one posted above. It’s even more impossible to visualize what it looks like when sewn up, but I know it works.

After this, I frankenpatterned the skirts from the Simplicity pattern above onto this bodice, and could finally start cutting!

Then realized that due to the massive width of the sleeves here, I needed another *4 yards* of fabric. So much for doing this dress on the cheap from the stash. The sleeves were slightly too wide to fit two of them across the width of the fabric, which means I’ve ended up with 4 yards of fabric @ 20 inches wide left. At least it’s a beautiful fabric, useful for many time periods!

And also promptly went on vacation for my honeymoon/first anniversary, and therefore am very behind on sewing this in time for a party on Saturday..