Alas for my wallet, this dress needed all new fabric. Here’s what I got:

For the petticoat, cotton organdy from Renaissance Fabrics. When you first get this stuff, it literally feels like paper. I washed it which removed some of the chemical finish, but leaves it at around 70% stiffness as before. I had 5 yards on hand which was intended to be a corded petticoat and other Victorian stuff, but used it all up just on the base petticoat and 2 of the ruffles. So ended up buying another 5 yards, of which most became more ruffles. OMG so many ruffles. At least I bought a ruffling foot, so I don’t need to gather by hand, because gathering 3o yards of ruffles?

For the outer skirt base, and the bodice base, I got some Southern Belle cotton. Joann only had this stuff by the bolt online, and of course the sad-excuse-of-a-store near me didn’t stock it. I ended up getting it from Amazon of all places. This is a really light and tight woven cotton, both lighter and tighter than the average white muslin at Joann. Bought 5 yards of this, and if there is any left it’s great for petticoats as well.

For the skirt ruffles, I ended up buying white, peach, and rose pink silk chiffon from Dharma fabrics. My original plan was to buy white chiffon and dye it, but the color samples I got were so perfect I figured it was a no-brainer to use the colored stuff (At least the samples were good eventually. The first order of samples I got was rose habotai instead of rose chiffon, and apple green chiffon instead of peach. My second order to fix this also ended up with apple chiffon instead of peach? The third time I requested they check the order carefully, and the owner called and replaced the samples for free. Huzzah for good customer service!) 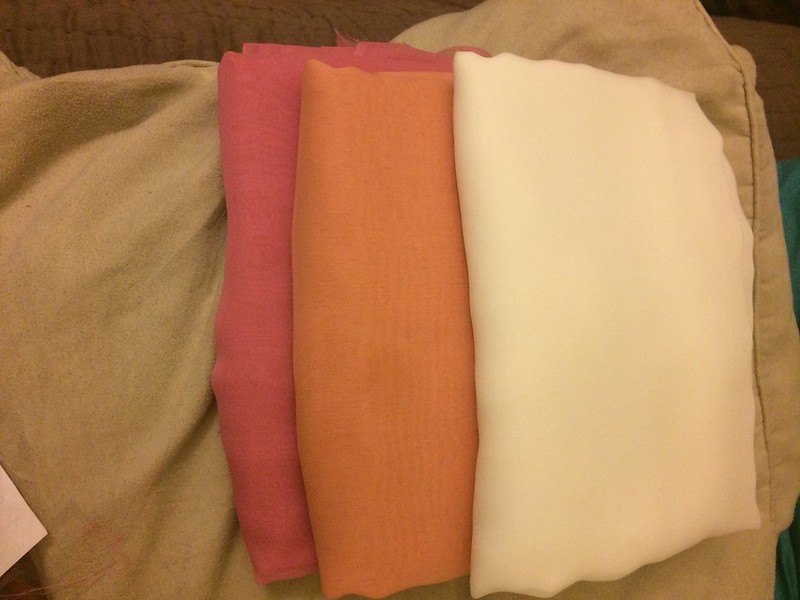 The bodice and sleeve fabric were tricky to find. Per an interview with the costumer, the original was made of vintage silk saris.

Best screenshot I could get showing the fabrics. Unfortunately most of the shots of the dress are in bad lighting.

I also scoured the ebay sari market, since I figured it was the only way to find anything that looked remotely close.

For the sleeves, I had a decent number of options. I ended up with a nice vibrant pink georgette-ish fabric (fiber content unknown) with silver and pink embroidery. I would have preferred gold, but this works. It’s even nearly the same shade of pink as the bottom skirt ruffle! A tad darker, but I think it will read as the same once on the dress. 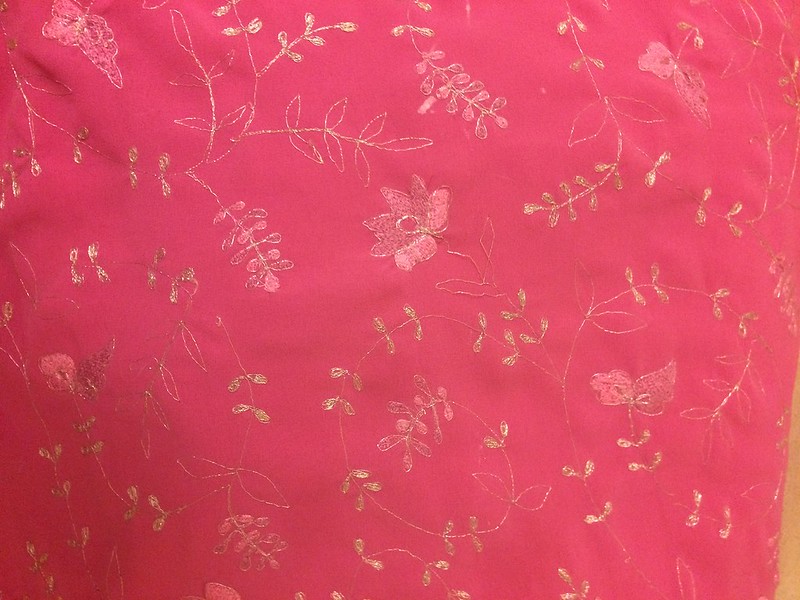 The bodice Stressed Me Out. The original is white (probably sheer?) with some sort of pink and gold floral pattern. This does not exist anywhere. I looked through every sari/hijab/dupatta on ebay, plus ever chinese brocade synonym variant I could think of, and came up with nothing. I ended up buying the closest thing I found (and seriously, I had no alternatives). It’s a white netting, with pink embroidered flowers. Plus a bunch of shiny mirror things, which were super in style 20 years ago… 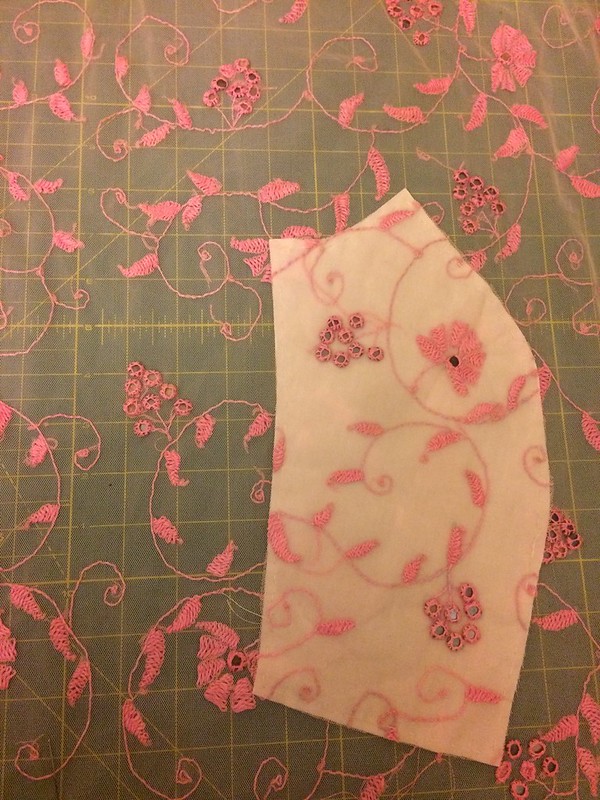 I was pretty conflicted around this. The silver mirrors were an ok sub for gold embroidery, but it just felt so *tacky*.

However, that’s kinda the point of this dress? Kaylee is meant to be unsophisticated, and not have the most impressive taste in fashion. To quote the show:

Banning: Who made your dress, Kaylee?
Kaylee: Oh, do you like it? When I saw the ruffles, I just couldn’t resist.
Banning: You ought to see to your girl.
Kaylee: Shah muh?
Banning: Your girl. She’s not very good. She made you a dress that looks like you bought it in a store.

A friend of mine also pointed out that the silver mirrors are incredibly Kaylee-feeling, and she probably would have wanted them on her dress if that was an option. So I’m feeling better at this point…

And actually once I cut it out, I really really like how it looks. For some reason it looks so much better cut into pattern pieces than when it was a whole rectangle. Phew!

This entry was posted in Fantasy/Scifi/Cosplay, Kaylee Shindig Dress. Bookmark the permalink.