So for the vast majority of history, when you went out, you wear a hat. And therefore I embarked on my first ever adventure in hat-trimming! Started with a hat from Amazon, a bunch of feathers, black silk taffeta, and whatever black trim I could find in the stash.

1890s hats are pretty hilarious. They basically look like someone dropped a pile of stuff on a hat. While drunk. And they let their 5 year old call the final decorating shots. Piles of fabric, bows, ribbons, feathers, and birds. LOTS OF BIRDS.

Correct state of mind before making one of these hats:

I SEE YOU THERE

When there is a disagreement between the milliner and customer about what constitutes “too many birds”:

I think the hat in the middle is actually about to fly away?

Photo from History In Photos

Fun fashion example – even though feathers were clearly in style, sometimes you just want something different! 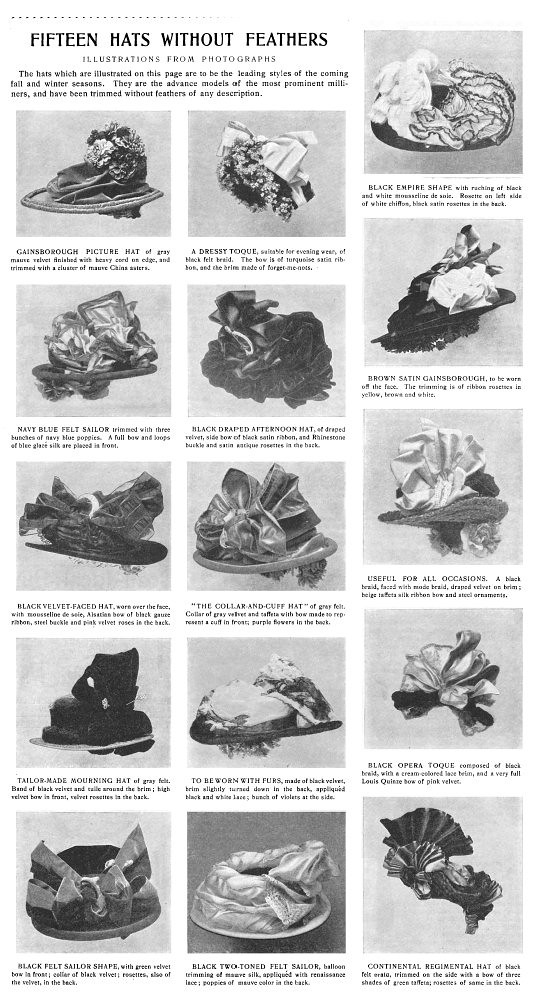 Started with a straw hat from Amazon.

First I removed the ugly bow.

Then I took about 1/2 yard of taffeta and draped it on the hat. Pinned it it random places until I liked how it looked, and tacked it down.

I made a lace cockade using this tutorial. It’s 3″ lace, so it’s a pretty massive cockade. I was thinking of putting 2 on the back, but I’m kinda enjoying the look of one (also, lazy. But I can always make another later). The lace was $1 from a theater sale that I bought with no purpose in mind.

I attempted to make a pleated fan thingy, but the taffeta was too drapy to actually stand up by itself, and I don’t have any starch. So no fan thingy for now.

Then some rooster feathers on the back. I left them in the ribbon they came in, since that made it so much easier to attach:

Some ostrich feathers on the sides so not all the party is in the back of the hat:

Cover up the back with the big cockade:

Only thing I’m not sure of is where to put this little guy:

Hanging out next to the cockade?

Peeking coquetishly out by the side feathers?

Thoughts? I wish I had gotten more than one bird so I could have one on each side. I’m really not sure where my mind was when I bought only one.

And uh, this hat ended up HA-YUGE. Like full on My-Fair-Lady-off-to-the-races-sized hat. Not really my intention. So I guess I’ll just call this a really fashion forward hat? Since it is definitely more late 1900s than 1890s.

This entry was posted in 1890s, Edwardian half-mourning, Hats. Bookmark the permalink.