A quick post while I’m still researching the fit of 1830s corsets.

So I actually made this chemise over a year and a half ago for my 1850s dress. Aaand the second it was finished, I hated it, and stuck it in the closet. Mainly, the neckline was a bit too high for the dress, and the sleeves were probably too long and I didn’t feel like fixing either of those things.

But since an 1838 dress has longer sleeves, I popped it on again. And it was actually kindof cute! 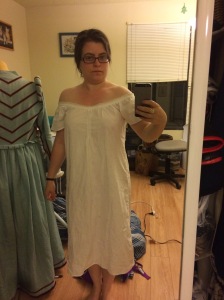 Here is one of the main reasons I was so annoyed with it initially. I had somehow miscalculated the sleeve width, and they were so narrow I couldn’t get it on. So I slit the sleeve up the top, and added a trapezoid-y shaped piece so it could fit around my bicep.

Except I forgot to include seam allowance of the old sleeve and new piece in my calculation, so the dratted thing was *still* too small. I ended up not sewing the underarm seam for most of the way so I could actually get the sleeve over my arm.

Where the bits are touching, was supposed to be a closed underarm seam.

Hence the frustration and shoving-in-a-corner (which is why it’s now covered in fuzzballs. The cats didn’t find it as unattractive as I did.)

The pattern is Elizabeth Stewart Clark’s free chemise pattern. I think late 1830s chemises were still coming off the regency patterns of using all square construction, so this may be a bit early for the period. The Workwoman’s Guide from 1840 still shows something with rectangular construction.

It’s made from plain cotton, I think bleached muslin? Something softer might be nice, but a few times through the washing machine should help.

I was even so pleased with it when I popped it on a few weeks ago, I whipped some cute polyester lace onto the neckline. It was $1 for 10 yards woot woot, from this nifty place called Fabmo, which gets textile/wallpaper/crafty donations from designers and locals, and resells them for cheap to keep it out of landfills. (Almost makes me wish I was a quilter, the books full of brocade curtain samples in every possible shade are fab. But alas a 12×12 square of fabric isn’t much good to the garment seamstress.)

The 3 pintucks in the front are another Brilliant Design Element, aka I needed a way to tell the front from the back.

Rather pleased to finally have a chemise! (I’m still wearing a tank top under all of my post-renaissance garb.)

This entry was posted in 1830s, Ada Lovelace dress, Undergarments. Bookmark the permalink.