And Now For Something Completely Different

Still no sewing mojo. Round 2 of Edwardian corset still a pile of muslin in the corner of the table.

Me whenever I thought about sewing the last couple of weeks  ->

Needed a simple project to get my sewing groove back. Somehow I stumbled upon the Male Pattern Boldness sewalong for boxers, and decided that would be perfect! I mean:

I used Simplicity 9958 which I got from ebay.

Perhaps you would be astounded to find that the Joann near me carried exactly zero patterns for boxers, even though the pattern books had several listed. (Except not astounded at all, because the Joann near me is TERRIBLE. Unless you like polyester fleece, the Casa Collection, and complete employee indifference/ignorance. Is it too much to ask that a fabric store employee know what a zipper foot is?).

The pattern doesn’t finish any of the seams, which is not something you want for clothing which will be going in the washing machine. I more or less followed the instructions except:

1) I used flat felled seams everywhere so no raw edges.

2) I more or less followed the sew-along to deal with the placket, but after I did the inner leg seams.

3) Did some weird stuff on the inside of the placket to make sure all the seams were enclosed, that I really can’t describe in words.

Plackets are weird in general. They make no sense just staring at the fabric, but blindly following a pattern seems to work. Now that I understand how this one works, I can do things slightly differently on the next pair (mainly around how big I fold my seam allowance under on the inside).

The fabric is a soft black cotton which was originally a sheet. I used bright green thread because of my excellent eye for color and how cool would that look against the black? It’s certainly not that I was too lazy to even change the thread out from what was currently on the machine.

By far the hardest part was sewing the waistband. I tried something new, where you do rows of parallel stitching on the elastic, stretching it as you sew, as many RTW boxers are made. The pattern instructions called for folding the fabric over twice to form a casing, but I find that elastic tends to wiggle and flip around when it’s inside a casing like that. My stitching looks fine if you follow the 5 foot rule. Closer than that, the row spacing is questionable, and the stitch length is inconsistent depending on how much I stretched the elastic. But what are you doing that close to Jeremy’s boxers anyways hmm?

And here is Jeremy, as the first guest model on the blog: 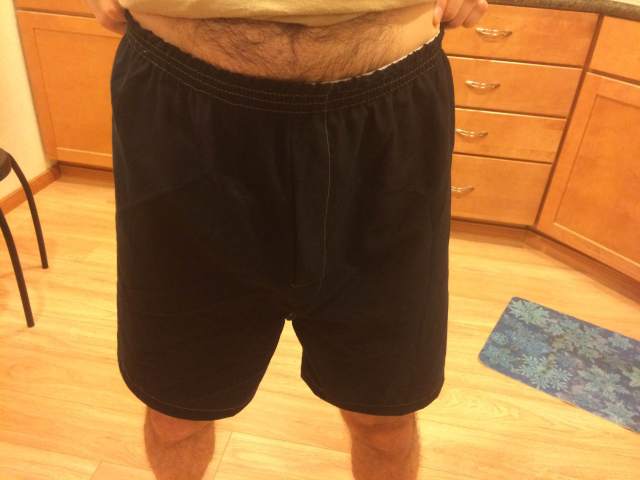 This entry was posted in clothing from this century?. Bookmark the permalink.