Really not much to say about the hem. It’s straightforward. I did a nice wide 5″ facing using some leftover blue dupioni from the last time I tried to make a Moiraine dress. Hence probably why the color is so similar. 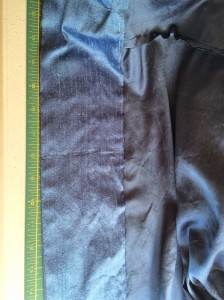 I have no proof that dupioni was used as a facing, but it’s not an unreasonable assumption. It was considered a lowly quality silk, and you wouldn’t see it used for outerwear – which makes it a pretty good fabric to use for a facing. There is evidence for cotton being used as a very wide facing (see here and oh god I want that outer silk so badly), so I was pleased with this (especially since I didn’t have any cotton or linen in the right color).

Sewed the first seam by machine to save time, flipped the facing over, folded down the top, and did a whipstitch by hand to sew it on. And the hem was done.