I started with 3 yards of glitter snowflake fabric from Etsy. I admire people who can make glue glitter on in snowflake patterns, or glue THOUSANDS of swarovski crystals to fabric, but I have noooo time for that. This fabric looks pretty fantastic as a substitute.

So then I had to figure how to drape this in the most useful way. I used this costume as an example, and tried to figure out how to use gores to get the most oomph into this cape.

1) I pinned the fabric up to the form, and eyeballed where I thought the train should end. I’m not going for super long, given that I’ll be wearing this at a crowded field at work, as well as house parties, and not all alone in an ice castle. So, I cut off the bottom where I figured my train should end, giving me two pieces. 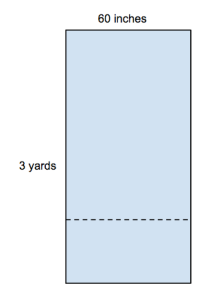 2) Using the large piece, what if I cut it in half into two triangles, essentially giving me two big gores for the back of the cape?

Luckily, before doing that, I realized that would be a disaster, given that my fabric clearly has a right and a wrong side. If I rotated one of those triangles, I would have two gores of the same shape.

2) Elsa’s cape pretty much goes from armpit to armpit, maybe even a bit forward from there.

Pinning my fabric up to the the form, I realized I only needed half the width of my fabric to do that. So, I cut the large rectangle in half to give me two smaller rectangles. Then I cut triangle gores out of each of those, making sure to do it mirrored on each piece so I would end up with 2 left gores and two right gores (and not 4 of the same kind).

Now, if you were smarter than me, you would have realized that I could have cut the left and right gores off the original large piece and avoided that center middle seam, but oh well.

3) Then I was left with the smaller piece I had cut off the cape (see the bottom piece in #1). I rotated it, so the 60″ width was now the length. This piece was still much to wide to use on any one side, being around a yard long.

So, I copied exactly what I had done in step 2! Cut it in half lengthwise, and cut each half into two gores. These gores have a much shorter length than the ones above, but because they are the pieces on my sides, they don’t need to be as long as the ones trailing behind me.

I was going to round out the bottom, but I decided I actually really liked the way this spiky triangle action looked. So, leaving it as is! I am *incredibly* pleased with how this looks. I’ll be turning the top edge under and using snaps to attach it to the back of the bodice.

This entry was posted in Elsa, Fantasy/Scifi/Cosplay. Bookmark the permalink.

2 Responses to Making of Elsa’s Cape