(This post will be rather long. I made the whole dress in 8 days, so no time to blog about it. Then I needed a break from all things sewing).

So, for those of you who know me, I have a bunch of internet friends. We get together once a year for the Anniversary Party. Since we are a bunch of nerds, we have a whole bunch of contests, including a costume contest. Last year I took first place for my Moiraine dress (post and better photos coming, uh, eventually). I had full plans to wear it again this year, since it’s such a fab dress. And instead, I made a Venetian style dress in about 8 days. Please never let me do that again.

Fabric: Since I wanted to knock this dress out quickly, I bought some polyester upholstery fabric for 60% at Joann. I know, polyester. But never having made a Venetian before, I wasn’t about to go for the gorgeous silk damask. If I make another gown like this, I will.

First, some dress diaries that I kept open in Chrome for 2 weeks straight, looking at seam lines, advice on construction, etc:

The biggest “first” for this dress, was my first time draping a pattern! While I didn’t plan on wearing a corset with this dress, I popped my Elizabethan paire of bodies on Lady Moraine (hey, every dress form needs a name) since the shape was what I wanted at the end. 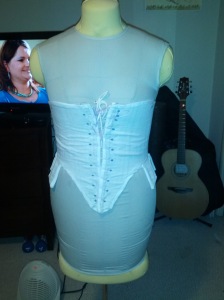 That would likely be Toddlers in Tiaras on the background. Somehow I need the most trashy mindless shows on while sewing.

You’ll notice that these don’t close all the way. Yet, the opening overlaps on me. Sigh. I need to do some more alterations to the cover, and likely surgery to the form itself (aka hacking off some of the massive cone boobs).

For the actual draping, I once again turned to Sarah, and this unbelievable step-by-step tutorial on 16th century bodice draping.  I put the seams in slightly different places, referencing the Venetian dress diareis linked above. 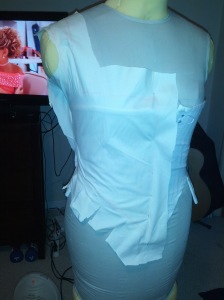 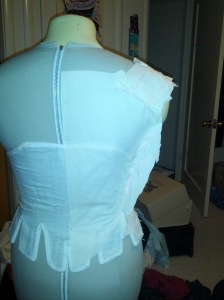 I popped if off the form, trued up the seams, then sewed together a mockup. And unsurprisingly, it needed work. I don’t have photos, but I added around two inches to the top, took in the front, and glared at the back, hoping it would magically work. 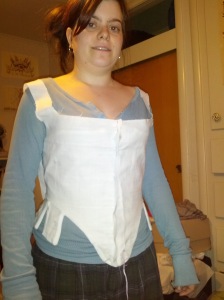 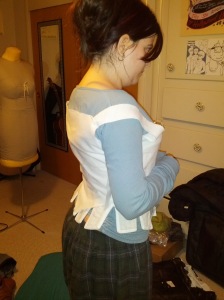 Hard to tell in this photo, but the back top is sad and gappy.

So the back top really needed a dart. In the old days, I would have pinched in a dart in the muslin, cut the fashion fabric, and hope that was what “drafting out a dart” meant. I tried to do more thinking here – I know it’s possible to rotate out darts in modern clothing. So I did some math, made the top smaller, and tried to move the pinched-out-back fabric to the side seam. I still wasn’t thrilled, until I realized that part of the problem might be too loose shoulder seams – look how nice it looks when I pulled things in! 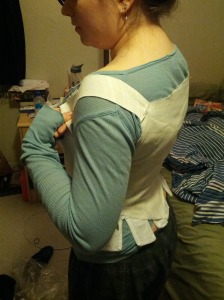 At that point I took a deep breath, and cut out all my fabrics. I have 2 interlinings (canvas from Joann remnant, and some random old stiff blue fabric) where I sewed in channels for 3 bones in the front and one at the back point. I then realized I screwed up the front channels (since I had included seam allowance in front where I didn’t mean to), and had to cut some off and sew a new channel.

I basted the fabrics together, and treating them like one layer, sewed them at the side seams like so: 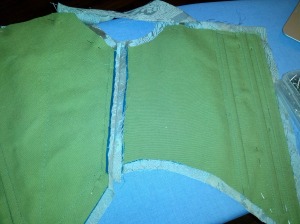 Then I made a few yards of bias tape out of the pick linen-look lining fabric I chose from my stash (no clue what this stuff is made of. It’s super loosely woven, and I had picked it up for a dollar at a theater costume sale).

Then I screwed up. Learn from me so you don’t make this mistake! My plan was to sew the bias tape to the seam allowance on the fashion fabric (seen above) then turn it all the way in so it couldn’t be seen, basically like a facing. My thinking:

Ugh. Maybe that would work if you are more adept with a machine, but sometimes I sewed outside the lines and ended up with more like 3/4 seam allowance (on the tape), leaving me with 1/4 to flip around 3 layers of fabric, and turn under. I should have undone a bunch of seams and resewn it, but I was in a time crunch. I don’t have photos of the horrible inside, but believe me, it is bad. Fraying fabric where I couldn’t flip it all under, really uneven seams, and overall ugliness. Moral of the story: leave more room in your bias tape, and don’t make it out of such a loose-weave fabric.

Onto the skirt! I lined it with cotton that was intended for my 19th century underthings, but I can always buy more. As usual, trying to line a skirt ended up with my lining and outer fabric being different sizes, and me cursing. But I figured the pleats would hide that sort of thing.

I folded the top down at varying heights, using this fab tutorial for attaching skirts on a pointed bodice. Then I found another mistake – I really should have put more fabric in the skirts. My cartridge pleats have a ton of space in between them, and aren’t nicely squashed together. Again, no pictures for the sake of my pride.

In the end, it still ended up looking like a dress! 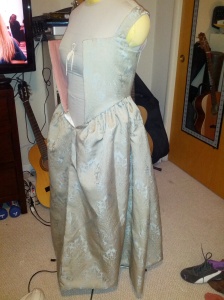 Dress on form. My form really is too big for this dress. 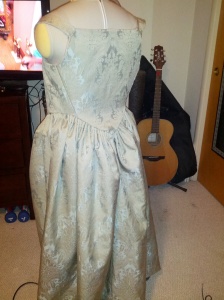 The “V” is a little too big/far down on my butt, but I can trim it down when I remake this.

I whipped together some sleeves using the pattern I had made for my Elizabethan bodice, but moving the seam to the front. I also sewed 2 ribbons into the front to lace through for a closure, using Jen Thomas’s findings on how-to-keep-ladder-lacings-horizontal from her dress diary.

Wearing the brooch I bought in Oxford, my Elizabethan smock, and a fantasy hair thingy, here is the costume contest! 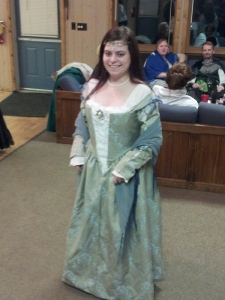 And for the second year in a row, I won first place! Not bad for an 8 day dress!

One day (hah), I’d like to go back and fix some things. Namely:

If I ever use this pattern again, I would also mess with the straps a bit. While Venetian ladies had the falling-off-the-shoulder thing down, mine is just falling, making the sleeves too long.

Still, I’m pretty pleased with this! One day I will go and do the historically accurate version and take a whole lot longer to do it.

This entry was posted in Renaissance, Venetian. Bookmark the permalink.

3 Responses to A 2 week Venetian